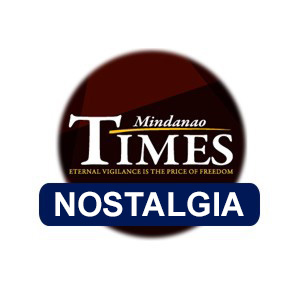 NOSTALGIA: Thank God I was a country boy, Part 3

CLARIN, Misamis Occidental (MindaNews)- Jungle Warfare. Our rice was meant to grow on wet paddies, but the seedlings had to be sown on dry ground. For us who were kids then, sowing time means war and that made it very exciting. The best site for a seed-bed is a forested area located at the river-bank. It is a territory guarded by small ferocious winged creatures – bees and hornets – our worthy adversaries.

Normally it would take only a couple of hours for older folks to annihilate the airborne antagonists with smoke and fire. But, wanting to see more action, we, kids would intentionally prolong the battle by using silly weapons like home-made bows and arrows, slingshots and bamboo spears.

We would tear their nests and hives into shreds just to make them furious. The ensuing counter attack by the enraged stingers would test our skills in evasive maneuvers and speed in running. We learned by experience that jumping into the water is a stupid tactic. The bees will just hover and wait. They know you will soon surface for air, and then you will be at their mercy. A rookie who falls into this predicament has only two choices, get stung or get drowned.

Unwary people and innocent animals caught in the warpath were not spared by their blind rage. Women doing laundry, firewood gatherers, even cows and buffaloes nibbling nearby must join in the running extravaganza to escape the swarm’s stinging frenzy.

The attack and counter attack would go on for a whole day. At night when the bees go home to roost, we would launch the smoldering assault that would end the resistance for good. Thousands if not millions of dead and dying insects would litter the ground for the birds to feast on.

Of course, the victorious marauders also suffered casualties. Those who were stung on the face would look like aliens from another planet. Those who stumbled and sprained their ankles hobbled like decrepit old folks. Some got black eyes, swollen lips or protruding bumps on the forehead after colliding on trees while running blind (eyes closed – to protect them from the sting). These hapless fellows cannot expect sympathy from their comrades; instead they become the laughing stock and objects of mockery for days.

The minute defenders may have retreated but the war is not yet over. After the air warfare here comes the ground warfare – preparing the seed plot. Clearing the spot is not easy. Weeds and shrubs are armed with sharp blades, thorns and poisonous sap. Besides, the thick undergrowth harbors crawling stingers ; large centipedes, spiders, several species of fire ants and worse of all … cobras and mambas. We brought hunting dogs to sniff and drive the snakes away while free range chickens take care of the crawlers.

A band of brothers

During my boyhood days, commercial rice production was unheard of. The rice we produced was mainly for family consumption. Anyway, in the absence of cash, “Palay” (unhusked rice) could be used as means of exchange for meat, fish, and clothes. Parents engaged in other occupations to earn income for other family needs. My own father was a policeman who later became a mere security guard but earning better wage than his former job.

At an age when there were more farms than farmers, population control was not yet a “do or die” issue. Abortion was unthinkable and there were no unwanted children. The more children in the family, the better, since more hands are needed in a labor intensive rice farming.

There were large tracts of land lying idle. A family who wanted to increase its landholdings may do so without much ado. Other folks who already got tired of farming would readily swap a hectare of fine agricultural land for a “talamuno nga hinuktan” (winner fighting cock), or a “Paliuntod (homemade shotgun). Nowadays, as farming becomes so commercialized, people may kill each other over a few inches of encroachment on the boundary.

I was the eldest of six boys born in a row. The two sisters born after us were too young to join the band. Papa was glad because with so many farmhands, his work was made easier. Mama on the other hand was mad because with so many babies to nurse, mouths to fed, laundries to wash and scoundrels to scold, she could hardly take a breath.
I and my younger brothers were inseparable. We were playmates and workmates. We had cousins from broken homes that also joined our band. Being the eldest, I was the commander. Since Papa would come home only on weekends, the care of our rice farm was left almost entirely to me and my siblings.

While Papa prepares the seeds, we would fortify the seed-plot against more and bigger nuisances – stray animals. We would erect a fence around the clearing to keep them at bay. The enclosure’s entrance is a simple labyrinth but an enigma to buffaloes, cows and goats which they could not solve, hence, they could not enter.

Dogs were the most destructive of all. They would play on the seedbed, scattering seeds and soil as if hit by a whirlwind. Dogs have better IQ; they had no difficulty getting through the puzzle entrance.

For these clever intruders, we used live weapons; kittens and a fierce watchdog. The smell of kittens is sure to make prowling mongrels uneasy. The presence of angry, hissing, clawing kittens really spoils their fun. They also have to deal with our big, cantankerous, extremely territorial guard dog that chases any living creature that ventures in his territory.

Chickens and wild pigeons were also persistent pests. Wild pigeons didn’t have a chance against our “tirador” (rubber shot) and “lambuyog” (sling shot). They usually ended up being broiled and eaten. But, chickens could not be harmed.

Most of the chickens roaming in the vicinity were owned by “Ikyo”, a neighbor who is a “Sequijodnon” (a folk from Siquijor Island) Sequijodnons are notorious for their “barang” (witchcraft). We can’t shoot the chickens because Ikyo would be angry and would retaliate by means of barang. We heard horrible stories about folks that were hit with barang. Their bellies grew so big that they could no longer stand because of the weight.

Nonetheless, we had a way of dealing with this problem. We would simply go and tell Ikyo the witch-doctor that the seeds we sow were poisoned. In a case like this, his barang won’t work because we did no violence to his chickens. It would be clear as daylight that his chickens committed trespassing and ate stolen seeds which happened to be toxic. The alarmed Sequijodnon would frantically round up his chickens and jail them all in a pen under the house. The amusing truth is that, it was a lie. The seeds weren’t poisoned at all.

We would spread the seeds thinly on the seed plot and cover them evenly with fine top soil. Then Papa would stand at the middle of the seed-plot holding something that resembles a bouquet. It was a bundle of curious objects consisting of thorny “Tapilak” leaves, nipa blossoms, lemon grass, a comb with an “algoha” or large needle and a piece of “ramos” (palm leaves that the priest sprinkled with holy water on palm Sunday).

He would solemnly plant the strange bouquet on the seed-plot. It was not meant to grow there and it was not for decoration either. It was a “LIHI”. I can’t find an English word for this, but it symbolizes the farmer’s wish and prayer.

The holy palm leaf as an emblem of God’s presence would deter mischievous “engkantos” (evil spirits) from molesting the crop. Through this lihi, Papa prays that every seed sown would quickly shoot out needle like embryos, and that each seedling would grow and multiply like lemon grass. With the comb, he pleads that the growing rice plants would not be disheveled by wind and pests. The thorny leaves that look like spiked whips were to scare pests and vermin away. The nipa blossoms which look like grains of palay, though a thousand times bigger than the real ones, represent a cluster of large, flawless, golden rice grains that symbolize a bountiful harvest.

This ritual may mean nothing to a self-reliant modern agriculturist. But in olden days it implied a humble dependence on Divine providence. It symbolized a farmer’s respect to God who alone can make plants grow and yield fruits. It is his way of honoring the kind Master who provided the land, the seed, the sunshine and rain as well as good health and other priceless provisions.

While Papa and his “hunglos” (gang of rice farmers helping one another) were busy preparing the rice paddies for planting, we would stay at the woods to watch and water the seedlings. With the seed plot well secured, it would be time to set up a camp and prepare for another war against boredom. This time we fight against human enemies, other kids who are also watching their seed-plots.

We construct our shelter like a fortress, but instead of sandbags we use “bunot” (coconut husk) that we gather from nearby coco lands to build our ramparts. The big “Ipo” tree standing in the midst of our fort is our ammunition depot which supplies us with hundreds of midribs to be used as spears. We hastily make bamboo swords and spar with each other to test our swordsmanship.

Not long after, opposing armies of naked, mud painted little warriors yelping like Indians would try to overrun each other’s fort. Ipo spears and bamboo swords may cause red welts but what really made us cringe in fear about these weapons was the fact that their tips were smeared with carabao manure and human feces. Those who got hit had no choice but to leave the battle and run into the river to get rid of the nauseating smell.

Will continue when I get nostalgic again. (MindaViews is the opinion section of MindaNews. Greg Villa Subrabas served as a top aide of a naval base commander at the Philippine Navy’s Sangley Point in Cavite City in the mid-1970s. He quit the Navy to pursue theological studies in Cebu City. He is presently managing a rescue center for the mentally ill in Clarin, Misamis Occidental)