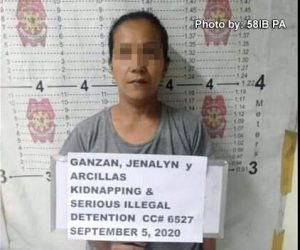 AN ALLEGED finance officer of the New People’s Army was apprehended in a joint operation of the military and police in Tagoloan, Misamis Oriental on Sunday.

According to the military report, Ganzan was served an arrest warrant issued by Judge Fernando R Fudalan, Jr. of Regional Trial Court, Branch 7, Bayugan City, Agusan del Sur for the criminal cases of destructive arson under CC No. 6624, and kidnapping and serious illegal detention under CC No. 6527.

Lt. Col. Ricky L. Canatoy, commanding officer of the 58IB, said the military and the police will continue to work together to pursue lawless elements.

“This arrest proves that the terrorists cannot run away from the long arm of the government. So, I urge the remaining remnants of the NPA to return to the folds of the law, avail the government program under Enhanced Comprehensive and Local Integration Program (E-CLIP), and live with your families peacefully, “Canatoy said.

Ganzan was brought and held in the Tagoloan Municipal Police Station. She will be endorsed to the proper court to face her cases.