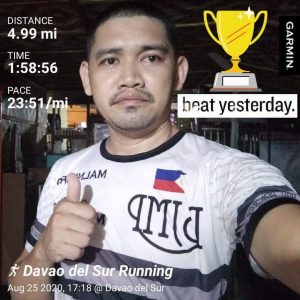 LONG-TIME sports ambassador of the Bureau of Jail Management and Penology (BJMP), Jail Officer 2 Harvey Bryan G. Malnegro, the Community Relations Service and Custodial Officer of the Digos City District Jail-Female Dormitory finished a 120km Virtual Footrace within the tiny confines of their jail facility despite being under lockdown.

The IATF has strongly implemented medical protocols inside jail facilities and jail officers are not exempt from these guidelines which are designed to help contain the spread of the deadly COVID-19 virus that can infect the PDL’s (persons deprived of liberty) as well.

Surprisingly, these dire conditions did not hold him back in accomplishing this latest feat, which also helped him stay in shape both physically and mentally.

He also added that his pace has actually doubled due to the smaller area and the fatigue level is quite different from running in an open space.

The jail officer recently suffered from an open wound leaving him idle for a month. This was a big set back for his weight loss program that started last January 1, 2020, under Coach Peter Villocino.

He was 85kg back then but with his and online program and routine he is now down to 77kg.

Joining the foot race was a way for Malnegro to be motivated to run daily and regain his muscle strength.

It was also a fundraising event for a kid named Aieghn Caileigh R. Bruno who is undergoing chemotherapy due to Leukemia which made joining the race more meaningful.