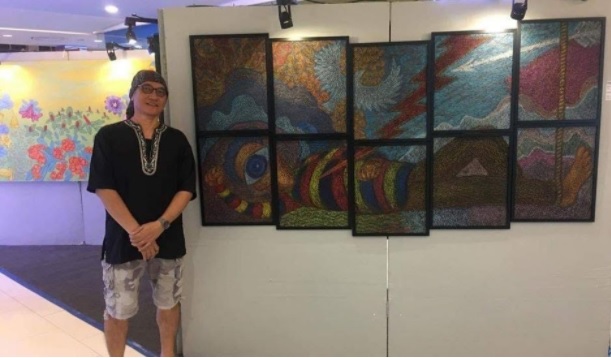 YOU probably haven’t heard about “Outsider Art”. Well, it’s simply an art made by self-taught artists or artists who have no formal art education. Here in Davao City this was introduced by Jessie Gonzales. a self-taught local artist whose works are typical outsider art style.

He is now in his mid 50s and is considered among the senior artists in the city.
Jessie said his gift in the arts started when he was still a young boy typically making drawings on his notebooks. He vividly remembered he had fun drawing and copying paper money because he’s got money even if it was just a drawing.

In the early 80s when he was in his 20s, he focused his energy in the arts where most of his artworks depicts social injustices influenced by what he sees in the troubled society during that time at the height of the insurgency. As a young idealist Jessie joined the underground movement as a propagandist using his skill in the arts in painting effigies and making drawings for leftist propaganda materials.

In 1988, he was arrested and held in police custody for charges of subversion. Eventually he was released and left Davao City for some time to mellow down from active participation in the movement as he was already starting to have a family then.

As things came back to a more stable political scene. Jessie went back to a normal job as an artist illustrator in different printing presses. It was also the time where local artists were regrouping and started to make some noise in the art scene like Lakbay Diwa and the Davao Artist Foundation. where Jessie became an active member. However, in early 2002, Jessie simply stopped doing arts for no reason at all as if everything blacked out. He was then busy with his job in the printing press which eventually led him to make his own printing outfit.

In the summer of 2017 Jessie was strolling in one of the malls here in Davao City when he met Alex Alagon, a new artist who runs an art gallery in that mall. Jessie got inspired to go back after 15 years to his first love which is the arts. It was also during that time that he introduced to the local art scene the “outsider art” where according to Jessie one just has to express his own art without being ruled by the academic standards. He said outsider art is the freest form of art and that’s why he was attracted to it. He desired to inspire more young and not so young people alike to engage into arts and not be intimidated by the rules of the academe.

When asked about his style, medium and subjects Jessie explained that his artworks look cartoonish and initially when he came back to the art scene, he only used colored pens on paper as medium but eventually turned to acrylic on canvas. His subject is all one-eyed characters with no ears which he explained that based on his personal views people nowadays don’t listen anymore and look at things only from their own perspective.

From the time Jessie came back to the Davao art scene he joined a number of group exhibits and a well-attended first solo show in 2019 titled “Art N’ Freaks” at the Abreeza Ayala Mall. Jessie is an active member of United Durian Artists and a member of the Board of Directors of the Dabawenyo Artists Federation Inc.