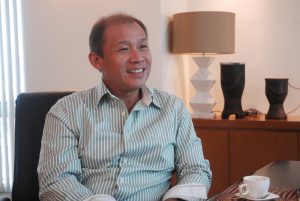 Globe President and CEO Ernest Cu appealed to LGUs to rationalize fees and expedite the processing of permits thereby enabling the industry to build the infrastructure needed to improve connectivity in the country. The appeal comes at the heels of his face-to-face meeting with President Rodrigo Duterte in Malacañang last July 30 to inform the president of the telco industry’s challenges. Cu said, “Each year, we make massive investments in billions of pesos to make our network perform at par with other countries. However, we can only go as far as what our existing infrastructure can give. If we want robust connectivity we really need to build more cellsites and roll out more fiber to homes. The current permitting process and fee structures simply do not allow us to do these.” Cu added, “This is a time when all industry stakeholders need to work together for the benefit of the consuming public. Connectivity is now an essential need especially during this pandemic. Let’s turn a new leaf and help enable the industry to build.”

Cu met with President Duterte Thursday evening, which was included in the taped broadcast of the COVID-19 briefing in Malacañang, Friday, July 31. In the meeting, Cu sought the help of President Duterte regarding the debilitating process of getting permits to build cellsites and towers which takes at least eight months. The Globe CEO showed the president and other officials present at the meeting the numerous permits Globe needed to secure to build a cell site tower – 29 to 35 permits in all.

This resulted in the President’s quick intervention by instructing his Cabinet officials to “take the most drastic measure you can find” to fast-track the processing of telco infrastructure permits. Interior Secretary Eduardo Año informed the President that the recently signed Joint Memorandum Circular (JMC) No. 01-2020 from concerned government agencies will make the issuance of permits a lot easier, with streamlining of permits to reduce processing time to a maximum of 20 days.

Globe welcomed the new development and response from the President, “We thank President Duterte for giving us the opportunity to present our predicament, and for his swift action on our problem with tedious LGU permits for the construction of our cell sites. We are hopeful that we can get more cooperation from LGUs and HOAs. As Filipinos adapt to the new normal, having ample ICT infrastructure is particularly important to improve internet speed, increase coverage and capacity for data hungry customers. In addition, having many cellsites is critical to successfully roll out advanced technologies like 5G services in the country,” Cu said.

Globe recently announced its expansion plans in various provinces all over the Philippines to meet the growing demand for more connectivity and bring the digital experience to more Filipinos especially in the countryside. For the longest time, the telco industry’s bid to expand and put up needed broadband infrastructures have been slowed down if not totally prevented by permitting requirements imposed by LGUs as well as the opposition by hostile homeowners’ associations. This was further compounded by network build disruptions given the stringent restrictions under an enhanced community quarantine, which started to ease in June when construction activities were allowed to restart.

Congressman Jericho Nograles in a recent interview said LGUs do not allow cellsite build-ups due to health hazards, which has not been substantiated with scientific documents or findings. Homeowners’ associations on the other hand disallow building of cellsites in their areas because they are unsightly.

Globe has earmarked $1.2 billion in capital expenses this year, a large percentage of which is dedicated to network and capacity building.