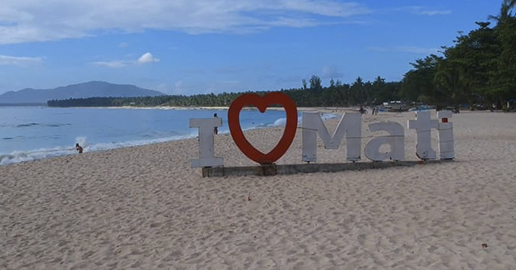 Dahican Beach, along with all other tourist attractions in the City of Mati, is now open to the public.

As the city ushers in the new normal pending the lifting of the modified general community quarantine on June 16, the Department of Tourism and City Tourism Office has released certificates to operate to 30 resorts and hotels.

However, Mati tourism officer Dashiel Indelible Jr. clarified that not all 30 would open simultaneously as some establishments have yet to comply with the implementation of the minimum health and safety requirements mandated by the DOT.

Due to the COVID-19 threat, the City of Mati locked down its borders to tourists and visitors for the past months. The tourism industry is the most affected sector leading to an estimated loss of P114M for the months of March, April, and May.

Before the pandemic, the City of Mati has an average tourist arrival of 25,438 per month, with estimated daily expenditures of P1,500 per tourist, which translated to P38 million per month income. Among the major events were the Pujada Bay festival and the activities marking the founding anniversary of the city.

Indelible said they are hoping that the local tourism industry will recover from the slump, especially now that the most popular attraction of the city, Dahican Beach, is open to the public once again. The province has also opened its borders even on weekends, with the provision of strict health screening and monitoring.

With the City of Mati’s Pujada, Mayo and Balete bays declared as “Most Beautiful Bays in the World (MBBW)” on Feb. 20, 2020, the city also expected massive tourist arrivals. All visitors and travelers who plan to visit Mati City should anticipate strict health screening at checkpoints, which could result in delays.