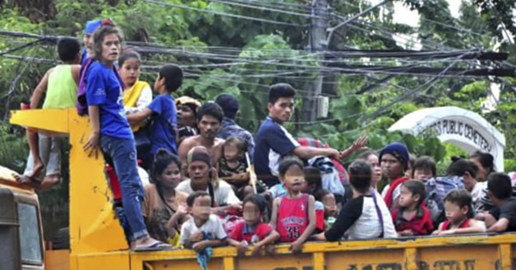 Residents of Barangay 8-A have submitted a petition for the Lumads inside the United of the Church of Christ of the Philippines (UCCP) Haran compound to return home to their communities.

The petition came in the wake of the deaths of two infants in the compound within 10 days so each other.

Ariel Lagmay, 8-A punong barangay, revealed that their office has received a petition letter, with attached signatures from his constituents, expressing their concerns over the presence of the Lumads inside the compound.

“We elevated the petition letter to the authorities because it was addressed to UCCP-Haran and to Mayor Sara Duterte-Carpio,” Lagmay said.

The Pasaka-SMR, meanwhile, denied that the infants died from the virus.

Datu Mentroso Malibato, the vice-chair of Pasaka, said they took all measures to protect the inhabitants. “Through the help of our volunteer doctors, we implemented social distancing, handwashing before entering the compound, and made regular health consultations,” he said.

“The spreading of fake information towards us is degrading us, as if we are ignorant, don’t really have legitimate demands, and create trouble here in Davao City,” he added. “Aren’t disinformation and misinformation prohibited under RA 11332 also known as Bayanihan to Heal as One?”

Recently, Mayor Sara Duterte said the Lumads inside UCCP Haran are already suffering from a health crisis even before the pandemic.

That is why she wants to charge the Pasaka day Salugpungan Kalimudan-Southern Mindanao Region (Pasaka-SMR) with murder for what has happened to the infants who died last month.

“If you are going to ask me? They were murdered by Pasaka. Their death will not happen if they only provided them enough food, essential health services like vaccines and deworming or anything that a growing child needs,” she said.

In an interview over the Davao City Disaster Radio, the mayor lamented the death of an eight-month-old baby and a three-month-old infant inside the facility on May 11 and 18, respectively.

She was informed that the eight-month-old baby, who was buried in the adjacent Madapo Cemetery, died of pneumonia, prompting authorities to exhume the body on May 13 for autopsy. The three-month-old infant was reportedly cremated.

Upon hearing the statement of the mayor, the residents of Brgy 8-A launched a signature campaign as support to the petition letter. They wanted to protect their barangay since they are all aware that the majority of the Lumads sheltering in UCCP Haran came from different neighboring provinces in Davao Region.

“The residents of the barangay made the appeal that, if possible, the Lumads living inside the UCCP-Haran should be returned home,” Lagmay added. “They are afraid because there are so many Lumads residing at Haran.”

Meanwhile, two Lumad families already returned home, with the assistance of the barangay council and the municipal governments of Talaingod and Loreto, Agusan del Sur last June 4 and June 5, 2020. Each family has seven members.

The barangay official agreed with the assessment that there is a serious potential health crisis inside the compound. “As we all know, they are congested inside the area and it is impossible for them to practice social distancing in a makeshift setting,” he said.