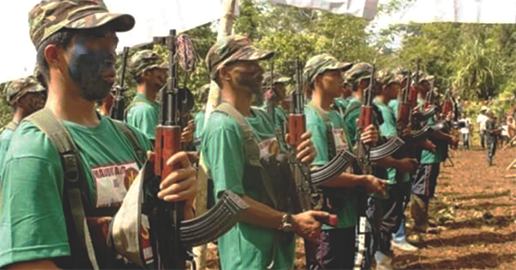 The New People’s Army in Mindanao is getting “desperate by the minute.”

Lt. Gen. Jose Faustino Jr., Eastern Mindanao Command chief, made the comment when informed about the rescue of a 17-year-old communist guerrilla who was left behind by her comrades to bleed to death.

The elements of the 3rd Infantry Battalion and the NPA exchanged gunfire for about 30 minutes in Sitio Pinanubuan, Barangay Sinuda, Kitaotao Bukidnon on June 5 before the Red fighters escaped.

The 17- year-old, identified only as alias Nina, was wounded on the left thigh and lower right leg. She surrendered to the pursuing troops after she was abandoned at the encounter site. Recovered from her possession were a fragmentation grenade and a landmine.

“It’s a miracle that she was found by our forces. An hour late could have been fatal as she could have died due to loss of blood,” the EastMinCom chief added.

She was recruited when she was still 15 years old by an NPA uncle and trained as a combatant at “Salugpungan School” in Sitio Nasilaban, Barangay Palma Gil, Talaingod sometime in 2018, the Army official said.

The Salugpungan schools have become the subject of controversy as the military accused its organizers of using the institutions as a nucleus of indoctrination and recruitment for the NPA. The Department of Education has since ordered the closure of all these schools because their curricula did not pass the widely accepted standards.

Faustino said that the NPA has ramped up recruitment of minors and students to beef up their dwindling forces.

“It will take a while for Nina to adjust to a normal life as she has just undergone surgery,” Faustino said.
“Wounds heal but the trauma still exists.”

“But just like hundreds of NPA minors who have been rescued and who surrendered to the government, Nina will surely live her dreams and explore her talents and potentials away from the clutches of her former comrades,” Faustino further said.