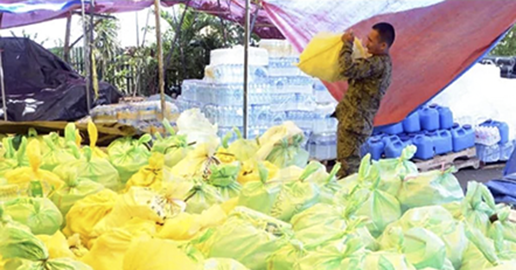 The city government rolled out the distribution of food assistance to the affected employees of business establishments that are not yet allowed to operate under the general community quarantine (GCQ).

Mayor Sara Duterte said the displaced vendors, massage therapists, and manicurists previously working in Osmeña Park and Roxas Night Market will be given food packs from the city government.

The City Social Welfare and Development Office (CSWDO) is still reaching out to more affected workers of establishments that are still not operating. Employers are also urged to contact the Davao City Reports or the Davao City Disaster Radio official pages to help their workers get assistance.

“Employers may reach out to Davao City Reports or through Davao City Disaster Radio official page. They can also directly send their request to the CSWDO,” She said on Friday over DCDR.

Under the GCQ guidelines, the establishments that are not allowed to operate yet and the last to re-open are those listed under Category IV of Department of Trade and Industry (DTI) Memorandum Circular No. 20-22 – 1) gym/fitness studios and sports facilities; 2) entertainment industries such as but not limited to cinemas and theaters, karaoke bars, comedy bars, pubs, nightclubs, beer houses, etc.; 3) kid amusement industries such as but not limited to toy stores, playgrounds, playrooms and rides; 4) libraries, archives, museums, and other cultural centers, art galleries, botanical and zoological gardens; 5) tourist destinations such as but not limited to water parks, beaches, resorts except those used as a quarantine facility; 6) travel agencies, tour operators, reservation service and related activities; 7) gambling and betting such as but not limited to cockfighting, casinos and the like; 8 ) personal care services such as massage parlors, sauna bath establishments, facial care, foot spa, and waxing salons; and, 9) any other amusement, leisure, gaming, and tourism establishments that promote mass gathering.