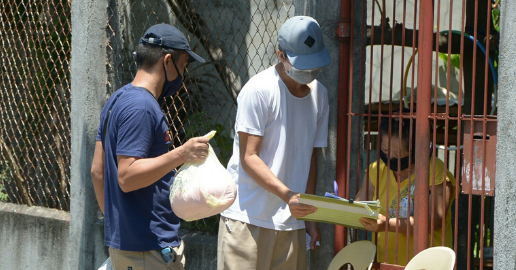 Rations to continue: Affected Davaoeños can expect LGU’s help while quarantine is ongoing

The city government is winding down three of the seven food programs rolled out in March to assist families affected by the lockdown.

“Many of our offices have completed our food relief assistance,” Mayor Sara Duterte said over Davao City Disaster Radio (DCDR) on Wednesday.

During the lockdown, the city government rolled out the food ration, fresh farm produce, City Mayor’s Office quick response ration, rice distribution, hot meals, and the food assistance for private offices and establishments not yet allowed to operate under the general community quarantine.

The three offices that are winding down their emergency food program are the City Social Welfare and Development Office, the City Veterinarian’s Office, and the City Agriculturist Office.

In three rounds of food rationing to 182 barangays since March, the CSWDO distributed a total of 1,292,195 grocery packs to 435,053 families. But the agency continues with its second program to assist displaced workers.

The CVO also completed the distribution of pork meat, eggs, cooking oil, dressed chicken, fresh milk, and salt to 86,960 households in 89 selected barangays in the city. The office delivered fresh vegetables, fruits, root crops, and fish to frontliners, and 22 barangays. A total of 57,414 agri-food packs and 30,000 kilos of fish were served to 1,657 frontliners and 55,757 households.

“We will continue until June and July but unlike the previous months – April and May, we released three times. Now, we will be releasing once a month for June and July,” she assured.

The CMO’s quick response ration, which assists households that have not received food ration from the CSWDO and other offices, will also continue. The team distributed a total of 22,720 sacks of rice to 182 barangays and 13,259 grocery packs to 3,395 individuals and 9,864 groups.

The serving of Hot Meals (Lomi and Lugaw) in the barangays will continue.

Meanwhile, the Barangay Cultural Communities Affairs Division has served 2,270 pots of lomi and 12,530 pots of lugaw in 98 barangays from April 2 to June 1.