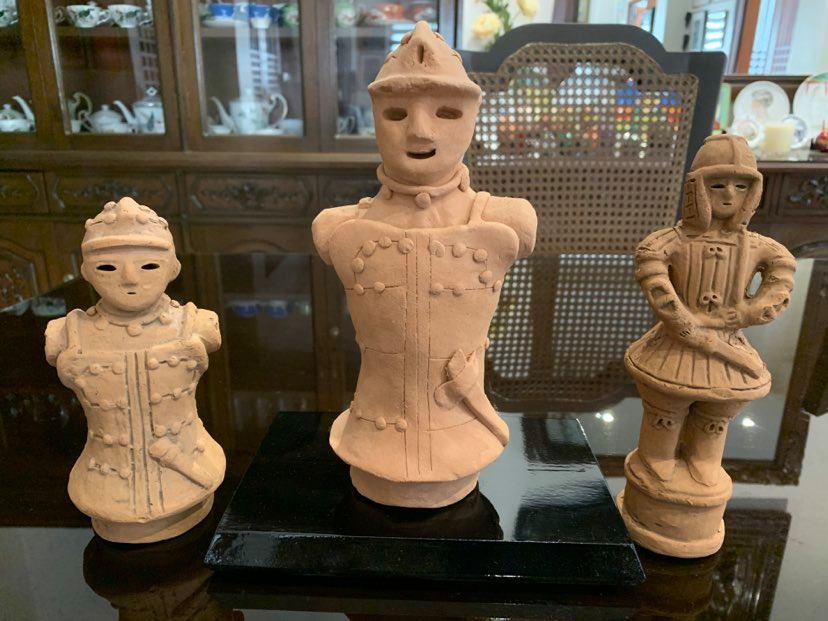 When Japanese sculpture is mentioned, one form that fascinates me is the “haniwa.” When I was still studying in Tokyo, these unglazed terra cotta sculptures truly caught my interest that I just had to collect some replicas to bring back home. My Japanese classmates described these earthenware figurines as “kawaii” or cute; and kawaii is what the general Japanese public seems to crave for even in these days of anime.

Haniwa is the collective term for the unglazed terra cotta cylinders and hollow sculptures that once decorated the surface of colossal, mounded tombs or “kofun” of the Japanese royalty/elite during the fourth to seventh centuries. Yes, haniwas were originally funerary sculptures. The haniwa came in a variety of forms from cylindrical haniwa which are like simple jars to figurine haniwa like houses, human figures, animals and various military, ceremonial, and household objects. These were placed on the top of kofun along the edges supposedly to define the boundary between the worlds of life and death or to guard the deceased in the burial mound. The ancient haniwa statues were made as tall as 1.5 meters.

There are legendary accounts in the chronicle of the Nihon shoki of 720 CE that mentioned that the haniwa originated as substitutes for sacrificial victims. But modern archeological excavations of thousands of ancient mounded tombs disprove the fact that the ancient practice of burying sacrificial victims alive or dead was ever practiced by the Japanese nobility of the past. The Japanese haniwa and the Chinese Qing military soldier statues highlight the differences in the attitudes held towards death in burial practices of the Japanese and Chinese. While the Chinese emperor placed emphasis on military strength upon his death; the Japanese nobility focused on culture with the variety of haniwa figures like houses, animals, common folk and warriors accompanying him upon his death.

The Japanese of the present doesn’t attach religious implications on the haniwa; rather these terra cotta sculptures are prized for their aesthetic and historical significance like I myself do. These have been accepted in the modern times as pure art. Yes, pretty much like how we appreciate the skill in carving of the Ifugao’s bulul or those carved wooden figures of stylized representations of ancestors. Since the 1990s, the haniwa has become widespread in modern day Japan; and it’s been popularly featured in trading cards and video games.

I only collected haniwa replicas of human figures such as soldiers, female attendants and musicians/entertainers to bring back home and which are now prominently on display on my shelves. The most popular haniwa is the dancer with open mouth which I have in my collection; while another universally known one is that depicting a horse which I am hoping to acquire one of these days when I get to visit Tokyo again.