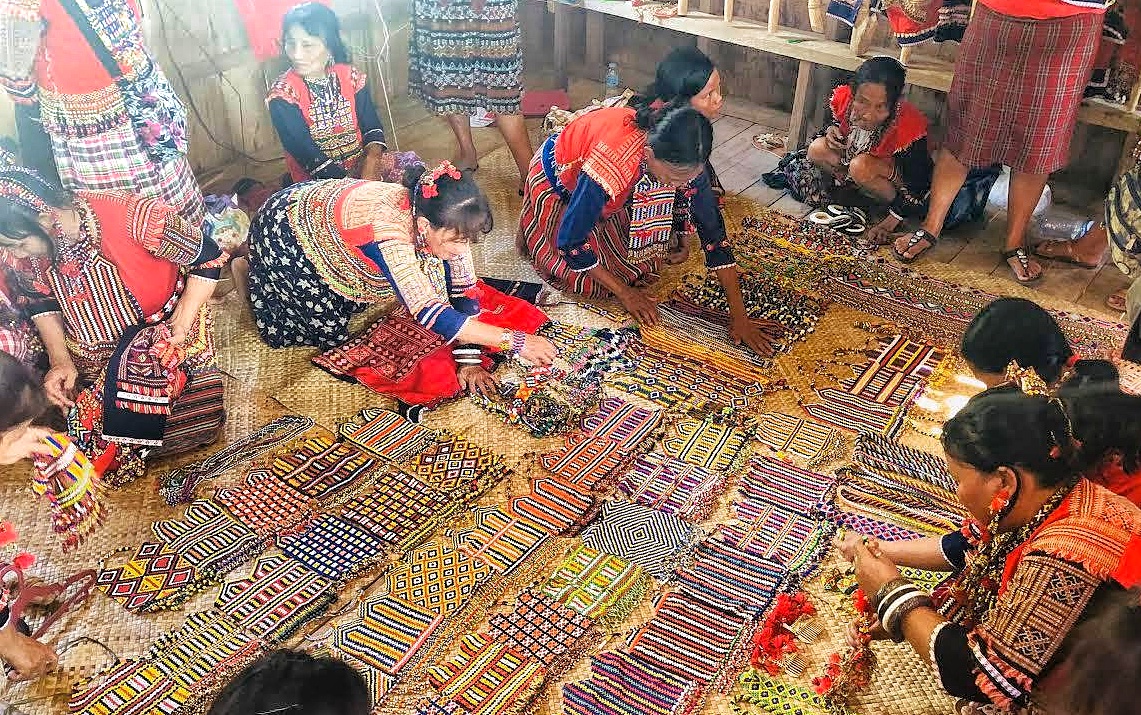 Through the years, Davao City has, admirably, spearheaded cultural projects in her earnest effort to showcase the rich facets of our Filipino heritage for the benefit of Mindanaoans. The Philippine Women’s College of Davao headed by Emi Englis (Fine Arts & Fashion Design Department), the Davao Fashion Design Council led by Joji Batu, plus the pioneering efforts of veteran fashion designer Alfonso Guino-o, and the mother-and-daughter tandem of Hon. Consul of Hungary Baby Maceda-Montemayor and Marga Montemayor-Nograles of Kaayo fame, just to mention some, have always been supportive of the Davaoenos’ appreciation, love and respect for our cultural heritage. These artistic people always join hands to pay their sincere respect and pay tribute to Mindanao’s ancestral weavers — their amazing skill, creativity, artistry and protean labour. They have always been the tireless front runners in promoting the beauty and fine craftsmanship of our traditional textiles through evolutionary couture.

Indeed, these artistes explore the infinite possibilities in terms of aesthetics, silhouette, construction and fabrication to produce extraordinary new looks inspired as they are with Mindanao’s indigenous fabrics.

All these people who patronize our traditional textiles help in offering sustainable livelihood to our tribal weavers, both old and young. This assures the preservation of our traditional weaving craft for future generations.

HRH the Prince of Wales Charles Arthur George Mountbatten-Windsor who happens to be the President of The Prince’s Foundation School of Traditional Arts in London wrote, “For many years, I have encouraged the promotion and revitalization of the traditional arts. It seems to me that the wisdom and knowledge of humanity lies hidden therein, knowledge that can help to restore our world to wholeness and integrity….The textile arts from different indigenous communities in the Philippines are a testament to that knowledge and to the universal principles that bind Man and Nature with their divine Source. Many of the textiles in the collection of the Ayala Museum were created as part of ritual and ceremony and to enhance the character and virtue of those who wear them.

They were made to please the gods.” Prince Charles’ letter is the foreword in the book, “Art and the Order of Nature: The Mercedes Zobel Collection of Indigenous Philippine Textiles” written by Dr. Patricia Araneta and Amihan Lim which was published by the Ayala Foundation, Inc. in 2014. The special book was published to accompany the exhibition “Art and the Order of Nature in Indigenous Philippine Textiles.”

Take the case of the “tapa” or the beaten tree bark which tito Boy Guino-o used in the past in one of his terno designs. I would like to mention that the “tapa” is one of the earliest textiles used in the Philippines, a technology which the proto-Austronesians of 5000 plus years ago brought with them to the country. Antonio Pigafetta, who accompanied Ferdinand Magellan to the Philippines in the 17th century, described the native Cebuanos’ fashion as “cloth woven from tree bark to cover their privies.”

Chinese traders and Spanish soldiers took note of how abundant the country’s tropical forests and vegetation had been to our early weavers. Cloth could be processed from the bark of trees; abaca was woven from banana plants; sago palm yielded a coarse sack cloth; and buri was a source of raffia cloth.

The natives’ love for brilliant colors saw the widespread use of natural plant dyes such as blue dye from indigo plants; white dye from rice water; red from tree bark; yellow dye from ginger root; and black hues from burying fibers in mud.

It was also recorded that our early pre colonial weavers used shells, mother-of-pearl discs, coins, glass beads obtained from Chinese traders, as well as embroidery to enhance their wardrobe, especially the ceremonial vestments. Yes, just take a look and compare with what our Davao fashion designers use as embellishments for their modern interpretation of Mindanaoan fashion in the present time

Indeed, our ancestral weaves or habi always have an exalted place in the life cycle activities of tribal villages. From peace pacts to betrothals, in various rites of passage, as proof of wealth and social status, as an instrument of trade, woven clothing is always a valued currency and a cultural icon.

Indigenous fabrics also identified a tribe and its place of origin. Fabric designs indicate the available plant dyes and fiber sources in the environment, the height of its women’s weaving ability; and the social and cultural realities they live with.

The Bagobo, T’boli, B’laan, Kulaman, Subanun, Mandaya and Tagakaolo produced polished, tricolour abaca textiles in their respective areas which comprise what is otherwise known as the “ikat heartland” of Mindanao. According to anthropologist Dr. David Baradas, it is in these areas of Mindanao that people resisted Spanish colonization and as such, significant links with Southeast Asia remain discernible. These textile links are the most valid reflection of the traditions shared by Southeast Asians before the arrival of the European colonizers.”