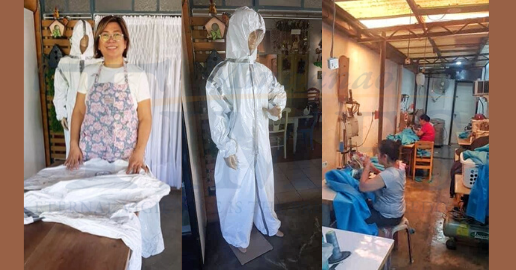 At the forefront of the fight against Covid-19 are our healthcare workers and other frontliners constantly facing the hazard of infection in various hospitals across the country.

With the surge of Covid-19 positive patients, our health workers are certainly outnumbered. Their constant exposure to the said patients, add to that the scarcity of Personal Protective Equipment (PPEs), has led some to self-quarantine, depleting their numbers some more.

This got fashion designer, restaurateur and businesswoman Susan Magno Antepuesto’s creative juices flowing, deferring her supposed “quarantine holiday”, when a friend whose mother, Marina Bello Ruivivar of Rotary Club of Downtown Davao, asked her if she can do their organization a humble favor.

“They were doing a fund-raising project to create PPEs for the doctors of Southern Philippines Medical Center, ” Antepuesto said.

Upon learning about the club’s initial order of 100 PPEs, she immediately prompted her staff, who were then displaced due to the quarantine. From a sample, she created a prototype using the materials provided by Rotary Club, with some alterations for added protection as requested by the SPMC doctors

“I thought, that was it. I just need to deliver the finished products for a few days, and then, we’re done,” she said.

However, it was not until she posted a sample of her work on Facebook when she received a deluge of requests from friends and from a number of medical frontliners.

“The need was just staggering especially that our hospitals haven’t received their supplies yet from national government,” Antepuesto shared.

So, she mobilized again her staff, which ballooned from 2 to 12, as orders increased to 270. Then she got another order for 100 PPEs for Davao Doctors Hospital, as some more medical institutions continue to inquire about it.

The outpouring of orders led to the demand of appropriate Department of Health-approved materials to piece the PPEs together.

“Local supplies are scarce due to the lockdown, while alternative materials are very hard to access as well,” disclosed Antepuesto.

Government has also restricted movement of cargo from warehouses in Divisoria, Manila to the regions. That would’ve made their work much easier.

To help her, the Rotary Club even had to do a border-to-border meet-up just to procure materials from outside Davao City.

“Fortunately, we were able to score some from my connections. We also depleted some supplies in NCCC just to meet the demand. I am also thankful that Gaisano Mall donated materials for the PPEs intended for SPMC, ” she shared.

Assing more challenge is the supervision of production to comply with social distancing in their workplace – which is in her residence in Ma-a. She had to provide the now-rare sanitizers and alcohol, and chlorine for the footbaths

Her first two weeks of community quarantine, that was supposed to be spent for crafting, doing upcycling and reviewing her piano and guitar skills, turned out to be a much busier grind.

“We are now full throttle in providing healthworkers their much needed protection,” she added.

Instead of immersing in what seems to be a never-ending show of negativity in social media these days, a group of women in Ma-a proved they can turn adversity into something valuable to our health workers.

“Just when I thought the quarantine was a passage to my eventual retirement, the Lord seems to have other plans for me,” Antepuesto said.

The Rotary Club of Downtown Davao will deliver the PPEs today, April 4, at SPMC.