A Day in Life as an Air Traffic Controller

It all started in Kitty Hawk, North Carolina.

The cool breeze of December was felt by the people living on this quaint town of the eastern seaboard. Folks from different walks of life were busy preparing for Christmas. But for Wilbur and Orville, they were about to make history.

The world had changed since the Wright Brothers proved to humankind that we can fly. In this day and age, flying is the fastest and still the safest way to get around from one point to the other, all thanks to the current technologies installed in modern aircraft, the skilled pilots who control it, and to the air traffic controllers, the guiding voices of the sky.

Every time you ask a child’s dream when he grows up, it is usually a doctor, an engineer, a scientist, a pilot, a businessman, a teacher, or a nurse. But, you will never hear a child wanting to become an air traffic controller. Every time I get introduced with new acquaintances, and when they ask what I do for a living, they either get amused or confused. Well, it rhymes, and it doesn’t make any sense. Same thing when they try to figure out about my work. Even some of my friends who aren’t into aviation still don’t get it what I do for a living!

The road to becoming a licensed air traffic controller here in the Philippines was not that easy. The training lasted for a year and had a high mortality rate. We started 81, but only 52 made it to the finish line. We often experienced information overload and countless sleepless nights. The only time that I can rest was during weekends. I either sleep the entire day to compensate for the lack of sleep I got from the past week, or just unwind. I almost cried during the training not because of homesickness, but because it came to a point that I can no longer process all of the things we need to memorize–that I have pushed myself beyond my limit. Every day in our training, our instructors would always remind us to think ten steps ahead while we’re in control, and every day in our duty we are expected to perform a hundred and ten percent to ensure the safe, orderly, and expeditious flow of air traffic. Unlike other jobs, we don’t receive compliments or praise from our seniors whenever we had an excellent performance or work output—it is a requirement. Mediocrity is a crime as it kills people and destroys properties. So as complacency.

There were times when I started to question myself–if I made the right decision, or if I got too ambitious to take this road. I have always dreamed of becoming one of the air traffic controllers in the country, but I never thought that the road would be that hard to tread.

One of the skills that I learned from our training is quick thinking and decisiveness. We always deal with last-minute decisions when giving clearances and instructions to pilots. There are scheduled flights, but we don’t expect them to come at their scheduled time of arrivals. Sometimes, there are delays, and sometimes they arrive earlier than their published schedule. Also, the weather plays a vital role in air traffic control. Usually, the pilot requests to deviate from their assigned airway to avoid it. As much as possible, air traffic controllers shall quickly address these requests since it greatly affects the performance of an aircraft. There are some instances when planes can’t land because the pilot has lost visual with the runway, prompting the flight crew to execute a go-around or missed approach procedure. I have experienced handling missed approaches several times, and I have also experienced handling emergency flights (e.g., medical emergency, general emergency, etc.). Things like these make our job very crucial, especially in the process of decision making. Despite these crucial moments of our shift, we were trained to maintain our composure.

A lot might think that we always consider the number of passengers, or the cost of an aircraft while we’re in control. No, we just think of it as one aircraft. No more no less. We separate them as if they were just a huge flying metal in our sector. When incidents occur (God forbid), it will slowly dawn on us that this aircraft was carrying almost two hundred souls on board and costs more than a hundred million dollars. But, at the end of our shift, everything is worth it, knowing that we have saved thousands of lives. It’s part of our job. It’s not about the prestige of being one, but it is how I give back to my country—public service. We may not be allowed to take a break during Christmas and New Year, and other important holidays, but knowing that we brought everyone to their homes and reunited with their loved ones is priceless. 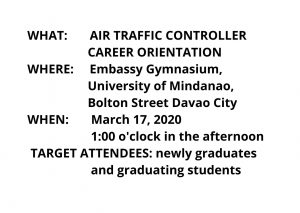 And the best part after our duty? We don’t bring our job at home.