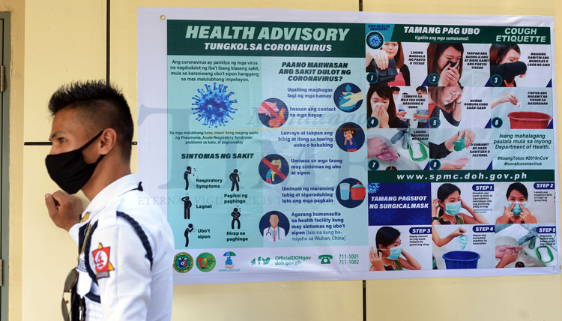 Only one PUI case at SPMC

The Southern Philippines Medical Center (SPMC) has one patient under investigation (PUI) for coronavirus disease (COVID-19).

It was reported on Saturday that there were two PUIs admitted to the hospital after showing symptoms of the COVID-19.

But SPMC chief Leopoldo Vega said only one PUI is at the hospital right now because the “other (one) has been discharged (as his test turned out) negative.”

“The one admitted is just waiting for the (test) results,” Vega told reporters during the USAPang KALUSUGAN press conference yesterday.

The SPMC head said there is still no confirmed COVID-19 case in the region.

“Let’s not get into a panic mode or try to be a problem, but instead, be a solution in terms of making sure that we can contain the virus in our region,” Vega said.

He said the PUI recently travelled in a country hit by COVID-19 and he showed symptoms. The patient, whose nationality and identity was not revealed, has cough and fever.

Asked on the condition of the patient, Vega said, “he is okay.”

The doctor said the patient initially refused to be confined.

“The PUI right now is admitted and cannot get out of the isolation facility,” he added, noting that the patient under investigation is not roaming around.

The patient arrived in Davao on March 2 and developed symptoms last March 5 and sought consultation in a hospital.

Allegedly, the patient went to a private hospital but was recommended to SPMC for it has the capacity and facility to handle COVID-19 cases.

Vega said that results of the test would come later within the day, pointing out that the patient will be discharged if the result is negative.

But if the test result turns out positive, Vega said they will do contact tracing especially to the people involved and had close contact with the person.

“Since this is a public emergency, everybody would have to be involved not just the Department of Health (DOH) but also the (LGU) in terms of identifying all contact persons,” he said.

“Because all contact persons would also have to be examined whether they have symptoms or not.”

Vega said if those persons involved have been in contact directly then there has to be a mandatory quarantine to make sure that they do not contaminate others and to contain the virus to prevent transmission.

“Right now we are prepared. There is no confirmed case, but we are ready,” he said.

He said that the hospital has prepared the necessary equipment, particularly the real-time polymerase chain reaction (RT-PCR) machine capable of diagnosing “a lot of these viruses”.

“We have the necessary contingency plans,” he added, also pointing out that they “are trying to procure a lot of disinfectants, needs, and personal protective equipment (PPE) for the workers in the facility.

The SPMC, he said, is also training their medical technology (MedTech) personnel for the identification and diagnosis of the novel coronavirus “because it is really new and they have to train at RITM (Research Institute for Tropical Medicine).

“They have been trained and we have the machine capable of doing the identification,” he added.

He also said they are waiting for the “reagent kits” that will be coming from the central office in Manila and reagent kits from abroad, which will also be necessary for the RT-PCR in testing samples for diagnosis of COVID-19.

“This is the kind of procurement that we are really wanting in terms of providing the necessary real-time diagnosis for all PUIs,” he said.

According to Vega, this would also benefit the institution because it will decongest it with PUI as it will help them to decide on who to admit or not depending on the results of the coronovirus tests.

The SPMC chief said they are capable of handling this because they have a depressurized isolation facility equipped for emerging and re-emerging infections, which can accommodate eight to 10 patients under investigation.

Currently, SPMC is the only institution here with a facility which is depressurised – meaning it has negative pressure. This depressurised facility is intended to also protect the health providers such as the nurses and medtechs who come around if there is an infection going on.

“The facility is well-equipped and is ready to accommodate the number of patients that has to be investigated. This is very important, especially if you talk about viral infection wherein it’s going to be droplets or airborne,” Vega said.

He said the facility is handled by experts in the field of viral infections.