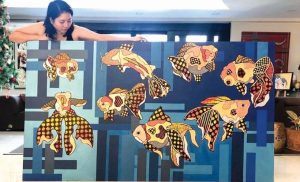 Having never attended any formal art classes, Katrina Gaisano-Lee, or Tanya as she is called by family and friends, is a Davao-based self-taught artist who began her artistic journey with a simple black pen. Originally making use of simple black and white patterns, the artist eventually began diversifying and incorporating vivid colors and textures into her art using acrylics and ink – all of which have now become integral elements of her artistic expressions.
From an early age, Tanya had already been exposed to works of local Filipino artists. Her father, being an avid art enthusiast and having owned a few paintings of several national artists in his collection, was an early influence on the young Tanya and her appreciation of art. It was his fondness of paintings, sculptures, wood works, mosaics, etc., that triggered an appreciation of art in the young Tanya which eventually culminated in her becoming an artist herself. 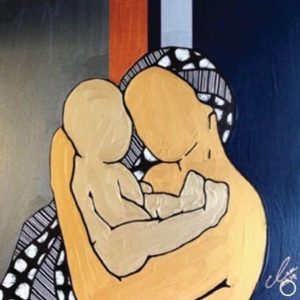 The very first steps of her journey as an artist began when Tanya was still quite young. During these early stages of childhood, she already demonstrated a natural talent for drawing. Being artistically inclined, she loved to doodle and draw assorted patterns on scratch paper, notebooks, as well as various surfaces and objects within reach. Over the years her raw talent, motivated by a passion to produce distinctive and eye-catching works, blossomed into the full-blown pursuit that it is today. 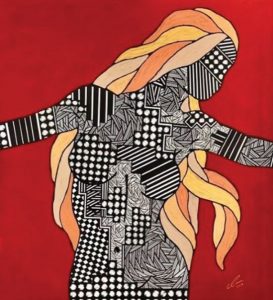 Tanya’s current trademark style is largely inspired by her experiences and exposure to various arts and cultures from her frequent travels abroad as well as throughout her native country of the Philippines. Her technique is most accurately described as contemporary, having a single subject, distinct patterns, and vibrant colors.

In 2013, after months of creating monochromatic or black and white drawings as a hobby and to merely pass the time, Tanya’s husband saw that there was value in her work and had the idea of framing and selling them. Not knowing whether other people would also see value in her art which at that time was just a hobby, Tanya was hesitant at first. However, after enough encouragement from her husband she was finally willing to give it a try. Since the time Tanya sold her very first piece of art, her husband Jerick has always been an unwavering source of courage, motivation, and support in her life and career as an artist. 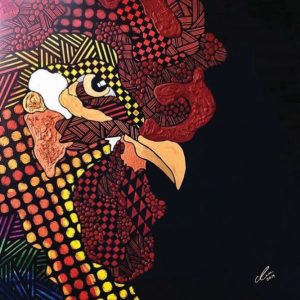 Tanya first began selling her art online via personal social media channels. This eventually allowed her to gain a modest popularity among family and friends who are all supportive of her passion. The blossoming artist got her first taste of public exposure when she participated in her first group exhibit in 2014. Since then she has participated in several group exhibits in and around Davao City gaining valuable experience, confidence, and public exposure for her work.

One notable milestone came in 2017 when she was hosted by Crucible Art Gallery for her first solo exhibit in Manila.

For her first solo exhibit, Tanya decided to depart from her usual themes and take on a more mature subject matter.

Erotic art, being the chosen subject for her first solo exhibit, aims to draw a distinction from what the general public may regard as conventional or safe. The unique pieces of art Tanya created for this exhibit were individually researched and intentionally chosen in order to leave an impression on the audience. The aim was to show how the artist is constantly evolving and is capable of taking on a wider range of subject matters. In the artist’s own words, she deliberately chose what is widely regarded as a taboo subject matter because it symbolizes both the beauty and turmoil of forbidden desires and for a brief moment, provided a time and place where these desires can run wild and free. The success of her first solo exhibit gave her the confidence to immerse herself even deeper into her art and pursue her passion with greater fervor which she continues to do today.

According to Tanya, most of her art work are a reflection of the different stages of her life thus far. More recently, her art has been especially influenced by the turn of recent events such as her struggles and frustrations to conceive, the birth of her first child, and her journey as a mother. Her art also bears influences of the cultures and traditions of her native country such as the tribes that first inhabited the Philippines. This is particularly noticeable through the vibrant contrasting colors that adorn most of her creations.

Despite still being quite young and a relatively new in the art scene, Tanya is already making a mark as a contemporary artist and is steadily gaining in popularity as more people get to know her work. Although her style has its own unique flair, it will continue to evolve as it is continually shaped and influenced by the artist’s personal experiences, adventures, trials, joys as well as the stages yet to come as she journeys through life.