ow leaning toward a more exciting sonic direction, Nathan & Mercury has raised the bar in terms of producing songs that combine a wide variety of music styles.

Fans will be elated to know that the pop/R&B outfit is back with two new singles, “Fools (Reprise)” and “Fake Love”—released on the very same day via Sony Music Philippines.

Written, composed, arranged, and produced by the band, both tracks update their foray into multi-genre experiments with newfound ambition and front-to-back confidence, discarding their inhibitions to make room for more past and present sonic convergence, soul and gospel influences, and shamelessly honest songwriting.

The new iteration of “Fools” unpacks rare moments of emotional vulnerability and restraint. The reprise version, according to guitarist and vocalist Nathan Huang, includes a different set of lyrics and a more stripped-down arrangement, but manages to capture the moroseness of the original.

“We had a different vision in mind for Fools,” Huang shares. “However, we want to give off the same message, each line still sung with pain and yearning for better days. While Fools is already gospel-y as it is, we kicked it up a notch by adding in instrumentation and a much colorful play of the chorale. Short but sweet with a total running time of 1:28, Reprise, as we fondly call it, gives off a solemn and intimate vibe.”
On Fake Love 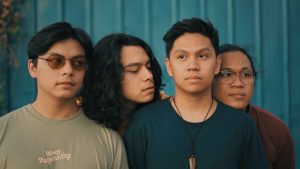 “Fake Love” sets the course of where Nathan & Mercury is headed as a musical group. “In as short as 3:34, we experimented on our usual repertoire by mixing in instruments we’ve never used before (i.e. brass),” Bassist Angelo Sison explains. “We mixed together several of our influences, particularly in pop and R&B, with hints of gospel and hip-hop. As a song, it speaks of not wanting anything less than real love—one that shouldn’t cost anything but is freely given.”

Guitarist Alex Samonte points out how difficult it is to produce and arrange “Fake Love,” which initially had 3-4 versions ended up getting scrapped at the very last minute. “We had to get a choir and brass players and the whole thingamajig, then took us a good while to gel everything together. But after a month or so of production, it all went well. I mean, I’d like to think it did.”
Both songs are intended to be released as a single track, given that it goes without saying that the two are connected: From being a fool to craving for real love. But according to Daniel Monong, the band’s drummer, they felt that “Reprise” and “Fake Love” can stand on their own individually. “So yeah, we’re releasing them on the same day because the two belong to each other.”

Fun fact: Nathan & Mercury spent a total of 30 studio hours for the whole production of both songs, not including the mixing and mastering. It’s also their first time to record for 13 hours straight in a single studio session.