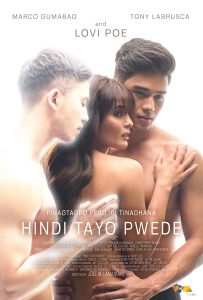 Viva Films introduces the sexiest love triangle in Philippine cinema this summer: Lovi Poe, Marco Gumabao, and Tony Labrusca in a movie written by the iconic storyteller Ricky Lee, and directed by yet another icon, Joel Lamangan.

“Hindi Tayo Pwede” tells the story of Gabby (Lovi Poe) or Gab for short, who finds love in a man who is also named Gabby (Tony Labrusca) and shares a long and deep friendship with Dennis (Marco Gumabao).

Gab and Gabby are looking forward to spending their lives together, but a car accident took Gabby’s life before their wedding day. Dennis keeps Gab company in her time of grief and finally confesses his true feelings for her. Gab can’t help but become intimate with him.

But Gabby is still very much present in Gab’s life. She still sees him, talks to him, even makes love with him. If she opens her heart to Dennis, she might lose Gabby forever. Is she ready to let go? Will she ever allow herself to move on?

With three Best Actress awards and three Best Supporting Actress awards under her belt and the exclusive title of “Kapuso Primera Aktresa”, Lovi Poe is out to touch hearts with her performance in this romantic drama. This is her second time to be under the direction of Joel Lamangan. Her first being “The Bride and the Lover” back in 2013.

Poe has done passionate love scenes in the past, just like in “The Annulment”, but her chemistry with Tony Labrusca and Marco Gumabao is something to watch out for. These two gentlemen are considered two of the hottest heartthrobs of today’s generation. Labrusca was sensational in “Glorious” and Gumabao was intense in “Just a Stranger”.

From the trailer of “Hindi Tayo Pwede”, it looks like these three dedicated actors didn’t hold back in doing steamy scenes to show the love and the longing of the characters they play. It also looks like their love triangle is getting the attention it deserves. In less than 24 hours of its release, the trailer already garnered 1.6 million views across all social media platforms. Comments from netizens show that there is excitement for this movie that is full of love yet full of heartache.

The theme song, which has the same title as the movie, now has over 45 million streams in various platforms. It is performed by The Juans.