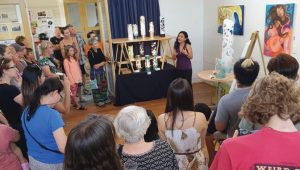 It seeks to give artists space, time and resources to work, and the community given access to free/low-cost art workshops. The past Christmas and New Year season, which is summer season in New Zealand, saw the biggest year ever with six artists awarded fully supported residencies.

The residency project took place from December 11, 2019 to January 26, 2020 as artists were at work onsite and running at least 12 hours each of free community programming including workshops, demonstrations, and arts talks.

Running since 2011, the project has seen 38 artists participating. 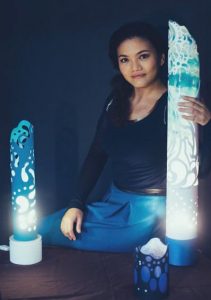 The Open Studios Project 2019/2020 was made possible with funding support from Rotorua Energy Charitable Trust, Rotorua Lakes Council, Creative Communities Rotorua, and the Rotorua Arts Village Trust.
The Arts Village Director, Mary-Beth Acres, said that the standard of applicants was extremely high and that there was a competitive shortlist. The artists were asked to create a proposal of their project and their classes. This included a detailed narrative of their vision as well as technical aspects such as materials budgeting. They also needed to give a Pecha Kucha presentation during the opening of the program. During the whole length of the residency, the artist studios were open to the public to enable both artist and community to engage with one another and enrich the artistic landscape in Rotorua.

The Filipina residency awardee was Amanda Fe Echevarria, M.A. Art Education. She is a mixed-media artist, painter, sculptor, artist-teacher, and curator based in the Philippines. She has taught courses and curated several group and solo art exhibits in Davao City and is currently the Artistic Director at The Sanctuary Art Pavilion in Barangay Ma-a, Davao City.

The culmination of the program was an exhibition of the artists’ works. They were asked to deliver a short speech about their process, experience and final output during the program.

In a nutshell, Echevarria explained her work below.

“Emotions come in waves. You can be swallowed by it or you can ride and conquer it.

“This Open Studio Project was an opportunity to create an avenue for introspection. My 6-session workshop involved addressing negative internal dialogue by creating sculptural lamps. The artistic process was to first guide my students in identifying their negative self-talk or internal dialogue. I asked them to reword these harmful internal scripts into positive statements. I then asked the students to incorporate their positive statements to their lamp creations. I encouraged them and hoped that every time their lamp is turned on, they will be reminded to negate damaging thoughts and embrace their positive statements. One student proudly declared to me that she has finally accepted the statement that she is an artist. She has long had doubts about herself being an artist despite her impressive art career and body of work. Another student wrote ‘I am enough!’ in her lamp to address the gnawing sense of inadequacy that haunted her. I know this is just a small step towards healing but I strongly believe that a step forward is better than utter ignorance of the internal work that needs to be done. I included their works in my final exhibit as a culminating exercise and celebration of their efforts and internal triumphs.

“My final showcase included 2 paintings and 2 sculptures. The main piece is a 1.5 meter cylindrical sculpture. Both sculptures speak of my metaphor about emotions and negative internal dialogues. I visualize thoughts and emotions as waves that can make or break us…they can drown us or propel us forward. The two sculptures are made of PolyVinyl Chloride (PVC) pipe off-cuts. This large off-cut was donated by Gayle & Jeff Heath. I also make it a point to help in the preservation of the environment when I make art.

“The blue and yellow painting directly alludes to the sculptures. It is a figurative abstraction of a woman riding a wave while reaching for the sun, a woman conquering her waves of negative emotions. The second painting tells the story of my own internal struggles with negativity. It is a depiction of a slumbering mother and child blanketed by a swirl of dreams. The colors paint a hopeful picture of motherhood. I, being a solo parent, continuously struggle with self-doubt regarding my role as a mother. This painting is a visual declaration of competence and confidence as a mother. No longer ill at ease but rather slumbering peacefully, surrounded by hopeful dreams.”

Now back in the country, Echevarria’s next conquest is to finally earn her license as an art therapist. She is a firm believer of how art can help in mental health therapy. This belief has yet again fortified itself within her through her class in New Zealand and continues to do so through her art classes here in Davao City.