CR7 led by former Malditas National team member Marice Magdolo sports a four win no loss card in the standings after posting its fourth victory next to a tough Solido Women’s Football Club, 3-0 wherein she took charge scoring goals in the intense 50-minute match that earned her Player of the Match honors. Their other victory came off next to Ateneo FC, 9-0 earlier that day. 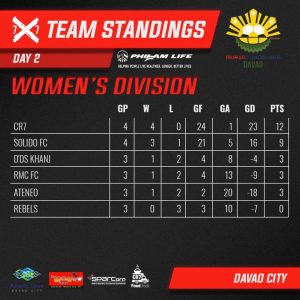 Solido FC which had their first loss in four matches is at second place while D’DS Khanj, Rizal FC and Ateneo FC are locked at third with similar 1-2 cards. Team Rebels FC is at the cellar with 0-3 to complete the roster.

In the men’s division, second season winner RMC Davao United leads the standings with a 4-0 slate. Former U-19 men’s national player Johnmark Diamat led the defending champs cruise to a 6-3 count next to Orlando FC of Tagum City. He also keyed the victory next to FCFC, 6-2 in the opener. 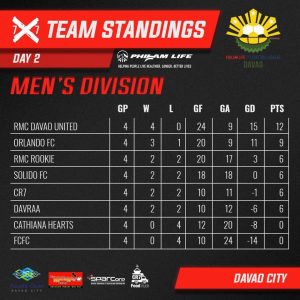 Despite their loss, Orlando FC of Tagum City is at second place on a 3-1 card while a four-team logjam is at third having RMC Rookie, Solido FC, CR7 Foodtruck and DAVRAA sporting 2-2.