It’s been there since 1973, and perhaps as a testament to its ubiquity and its role in Mindanao’s history, the Davao Gap Farming Resort remains to this day an educational destination for those seeking the greener portions of the city.

Earlier this month, TIMES editors, correspondents, and staff gathered at the resort to enjoy a needed R and R. Serving us with delicious comfort food were the staff of the Cafe Lorenza, led by its managing director Leny Villegas-Castillo.

GAP and the images of its carabao, one-eyed giant statue, and parade of the supernatural are still etched in every Dabawenyos memory even after close to 50 years.

How does a place like GAP exist for so long? It started with its founder, the late Quirino Villegas, who envisioned a place where people could learn about farming and local lore. It helps, too, that the property along Diversion Road also includes in its vicinity an old Japanese man-made cave.

In recent years, the farm destination has offered horseback and carabao cart rides for the public. On special arrangements, groups or families can organize camp outs at its overnight rooms and other facilities.

The farm describes itself as a “sprawling 10-hectare farm orchard, dedicated to durian, rambutan, pomelo, and other tropical fruits. Located approximately five kilometers away from the bustling heart of the city, it is set amidst verdant tropical greenery and Philippine flora. It showcases an outdoor museum of Philippine folklore, history and culture awaiting your discovery. Capture this rustic atmosphere and enjoy the serenity and tranquility in this mountain paradise.” 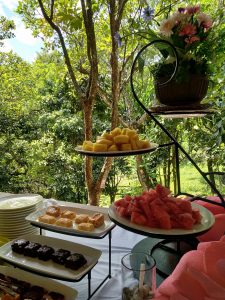 Leny, in an interview, said the farm management was speaking with partners to institutionalize a farm tourism program.

“We were the first to do farm tourism before it was a thing,” she said.

That said, GAP remains a happy memory for those who have been there. It was the original destination, and even amid the era of malls and beaches, GAP is still among the contenders, especially in the age of the Instagram.(photos by Amalia Bandiola Cabusao)