Yoga as a practice has grown popular among the young generation, more s

o the young professionals who find relief in its poses and even the challenge it brings upon one who practices it. Essa Quiñanola is a 23 year old lass who teaches Yoga here in the city. But the practice found her not in the typical fad-seeking journey but through an illness.

“A couple of years ago, I was diagnosed with skin lupus, an auto-immune disease that caused me depression and anxiety,” Essa shares. “The good news is, I’m not going to die. The bad news is, it has known no cure. I hit rock bottom and my illness gladly took over and jubilantly announced its presence. Rashes appeared all over me, driving me crazy. Living lost its meaning.”

Essa considers the moment of diagnosis as the lowest point of her life. “But I realized, I was wrong,” Essa was quick to add, “I ventured into the deep practice of Yoga which gave me new hope. Alignment of my body, mind (and emotions), and spirit. I immersed myself in the principles and practice of Yoga in the foothills of Himalayas. Stillness and surrender taught me that in this battle called Life, I am not alone. The Universe or Supreme Being who I call God, is with me, and that I belong to Him.”

When asked about her motivations, Essa readily confesses her belief that Yoga is a tool that empowers an individual for self-awakening. “Once a person understands his or her real identity, giants in forms ofsickness won’t be a hinderance to experience life at its best. The principles of Yoga reminds me that when life pushes hard, I must go back to my breath, to my Source, to who I really am. These principle strengthen and ground me.”

Like the people who are into Yoga, Essa loves the flow that gets promoted in her body and her breath as it encourages the practitioner to listen to one’s body to understand it fully. While she loves the countless Yoga asana (poses) that challenges her, Essa is fascinated with Shavasana (the Final Resting / Corpse Pose). “It requires no effort. You just have to lie down on your back, with palms open, facing up towards the sky. It lets the body relax fully. Ironically, though, even when it’s the easiest, my guru in Rishikesh, India told me that no one has fully mastered Shavasana,” Essa said.

Even with her striving, this young lady finds her illness as her biggest challenge. “There are many times when I get tired of being exposed to the sun, even for a short time. I would get redness and itchiness on my face. I couldn’t focus sometimes because my face would be burning with heat and pain,” shares Essa. Despite that, she is determined to face this life challenge unafraid. “The way we deal with problems, like illnesses, is Yoga. It’s not a religion, it’s a lifestyle. Our challenges are not our center, so we must focus on our purpose. In my case, I embraced the ugliness of the disease and fixed my eyes on how this sickness has led me to the inspiration of Flow with Essa. My situation and my illness is something I cannot force to change but I know I can change the way I respond to it. As a result, everything changes. Trust. Surrender. Just flow. Simply flow.” 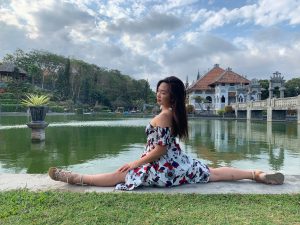 “It is through the wound that the Light enters,” the Sufi adept Rumi had said. Indeed, challenges can lead us to Light and turn into inspiration when we learn to respond rather than merely react to it.