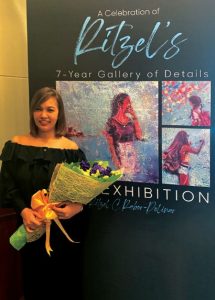 Ritzel C. Rabor Polinar is a lawyer and an artist. As a lawyer, she was a private practitioner for 18 years before joining the government service as Assistant Regional Prosecutor of Regional Prosecution Office, Region XI. As an artist, her artistic journey is eloquently put by her good friend, writer Douglas C. Crispino, Thus: “Those who knew Atty. Ritzel C. Rabor-Polinar in her college days remember her as a skilled watercolor artist whose works were even featured in a “Five Man and
A Woman Show” art exhibition in 1989.

As the responsibilities of a legal career, marriage (to Atty. Glenn R. Polinar since 1998) and motherhood (she has two boys, Jol and Fuy) claimed much of her time and energy, they (or at some point, Atty. Ritzel herself) might have wondered whether the artist in her had packed her things and vanished. 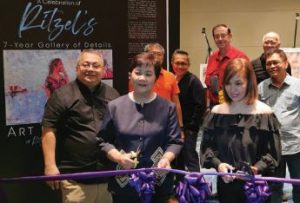 Fortunately, she didn’t. Intermittently, she just took notice of possible subjects (a wizened woman in a state of pensive grace, a naked child basking in the beach oblivious of mortality, a pretty girl unaware of her fetching but sadly ephemeral charms, among others) and snatched hours after daily grind to put them into the paper or canvass. “My spirit is awakened whenever I encounter a good subject- mostly of people whose expression or demeanor, or feature, move me…or a scene, a moment I could relate to. I wish to awaken the spirits of my viewers too and stir their senses. I always think that an artist’s mission in life is to magnify beauty in all forms, as beauty lurks in every corner, waiting to be unraveled and affirmed.” 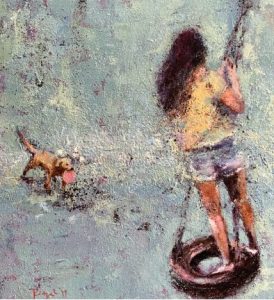 At present, Atty. Ritzel Rabor-Polinar Continues her artistic journey even as in between being a lawyer, a wife and a mother, she not only lovingly renders the portraits of prominent personalities but regular folks as well such as the hard-working sapatero or the flower vendor with her amiable smile in the streets of San Pedro, Davao City whose characters will be immortalized by this artist who simplify signs her works as “Ritzel”. 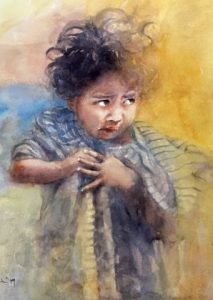 On going now at the just-opened art gallery in Tulip Drive, Matina is “KRISTO” an art exhibit curated by Salvador Ching. 21 artists are represented at gallery-owner Bernadette Gular’s newest art venue in Davao. Bernadete is a PWC graduate and aught at the UST Fine Arts school. Tulip Drive near Juna Subdivision is fast-becoming a business hub with many fine coffee shops and restaurants. Now, it has an Art gallery.

2 Left Feet!
Gary Tiongco (The HS’61 Classmate of Tato, Digong, Sonny D., Sonny P, Niel D., atbp.) told me this story about the national artist Victor Edades. Gary has an Edades painting “The Builders”, he once commissioned Edades to paint a nude-which after a few months was delivered and paid for. Upon close inspection, Gary noticed that the gorgeous gal had 2 breasts (OK!) but 2 Left Feet! So Gary asked Edades to “fix” the painting- and gave it back. Edades did, after a few months, but according to Gary, the original version looked better (A great conversation piece: A Nude With 2 Left Feet).

Reminds me of the portrait that Edades did of my mother-now hanging at the Museo Dabawenyo. Edades retired in Davao, taught at PWC and died here.

VICTORIO EDADES (1895-1985), spent the last years of his life painting and teaching at Ford and at PWC. He studied painting and architecture at The University of Washington U.S.A. He also did further art studies at the Atelier de la Grande Chaumiere and the Fontainbleu School in Paris. When he returned to the PH, he worked at the Bureau of Public Works and at Mapua where he taught. He headed the UST School of Architecture and Fine Arts in 1937. He was accorded the title of National Artist in 1977.
Attachments area