In less than 10 years, FlipTop has become a massive cultural phenomenon that continues to gain significant traction online.

Founded by Alaric Riam Yuson, popularly known as Anygma, along with two others, FlipTop Battle League pushes the envelope of Filipino hip-hop and battle rap to bolder, and more exciting places, while also championing the art form with uncompromised vision and inclusivity—reflecting the modern sensibilities of Filipino hip-hop fans.

A Decade of Influence

To date, the global sensation that is FlipTop Battle League has amassed more than 1.5 billion views on Youtube, beating international records on the strength of its viral and entertaining content. The platform has also launched the careers of some of the biggest and most influential battle emcees in Philippine contemporary hip-hop scene such as Loonie, Abra, Shehyee, Zaito, Sinio, Tipsy D, and Shernan—to name a few.

In terms of regional traction, the movement has proven to be an important pillar in promoting awareness and appreciation for both battle rap and Filipino hip-hop. “The quality and quantity of both hip-hop music and battle rap is constantly setting new bars,” Alaric Yuson observes (and pun intended; the basic unit of measurement in music is also often used to referred to as a really good line in rap lyrics). “More and more regions are organizing and seeking to develop their respective local scenes. And lastly, the positive effects of all of our hard work in each and everyone’s personal lives. This is considering the context of how hip-hop used to be perceived – lowly and unworthy of attention, much less pursuing. Now, everyone wants in on it, vultures included. Back then, one would be considered lucky to get to perform in the surrounding neighborhoods.”

The Biggest Hip-hop Festival in the country 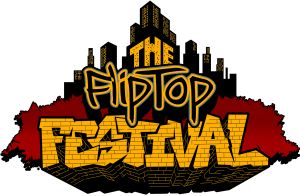 With nearly 10 years of producing sold-out shows and growing exponentially in terms of numbers and following—reaching to as far as Metro Manila, CALABARZON, Central Luzon, the Visayas, Mindanao, and the United States, FlipTop celebrates its legacy through the birth of the biggest hip-hop music festival in the Philippines.

Dubbed “The FlipTop Festival,” the two-day event is set to rewrite local hip-hop history as it debuts on February 7 and 8, 2020 at Aseana City with more than 200 artists from all over the country.

There are plenty of attempts to mount a definitive hip-hop festival in the Philippines, but what sets FlipTop Festival apart from these aspirants is its authenticity; much less to the extent of their ambition and vision, the collective’s genuine concern for the community. In terms of reach and importance, FlipTop has thrived because of people support, and it continues to hold a sturdier, more solid ground as it widens its viewership and extends its philosophy by going regional and international.

“The festival aims to really be as inclusive as possible, and more importantly, to have everyone represented properly,” Yuson points out. “As much as hip-hop has grown in the last decade, with every element, region, style, and era, it’s really not easy to make sure that no one is left out. So ultimately, we’ll try to achieve that; to get literally everyone to really represent and celebrate what we’ve accomplished as a culture.”

Over 200 artists will perform at the biggest hip-hop festival in the country, headlined by some of the finest and most underrated acts here and abroad.

Aside from the much-buzzed lineup, FlipTop Festival hopes to defy the rulebook with its carefully curated programming that embraces all elements of hip-hop, not just music itself and battle rap, but paying respects to turntablism and DJ-ing, b-boying or break dancing, graffiti, and just the overall history of the culture.

As Yuson takes pride of the diverse format for FlipTop Fest, he also warns patrons that this won’t rely on the familiar and the formulaic, and instead would foster a well-represented festival that cuts across various sensibilities and disciplines in urban music. “Some might assume that, having our roots as a rap battle league, our festival will be mostly about battle rap. But we’ve been reminding people for months now that, yes there will be a few battles, but they won’t be highlighted over everything else going on in the festival. We’re trying to get everyone! We have a few international artists, talents from the entire archipelago, veterans and pioneers, new-school cats, street entrepreneurs… everyone!”

Regardless of the setbacks and challenges, FlipTop’s head honcho remains optimistic and excited for the first-ever hip-hop music festival curated and produced by the “most viewed battle league in the world.” Keen on staying true to their low-key, non-commercial but inclusive mantra: “We’re showing the rest of the country and the world of how far we’ve come and how much farther we can take it.”

P.S. More details about the festival, including the full lineup will be announced in the coming days/weeks. Visit the official website for more details: https://www.facebook.com/fliptop.battleleague, www.fliptop.com.ph