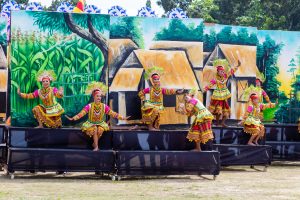 Held in December, this annual event not only celebrates the city’s rich heritage but it also honors the traditions of the Muslims and indigenous people.

“Muli nating buhayin sa ating puso at isipan ang makulay na kasyasyan nating mga Cotabateño(Let us relive yet again the colorful history of the Cotabateños in our hearts and minds,” said Mayor Cynthia Guiani-Sayadi.
The event opened with the  Guinakit Fluvial Parade which depicted the arrival of Shariff Kabunsuan, a 13th-century  Islamic missionary from Johor, Malaysia who docked in the Rio Grande de Mindanao.  Kabunsuan was responsible for introducing Islam in the South.  The guinakit was  a vessel used in the pre-Hispanic era.

At the festival, a fleet of guinakit was decked with red, yellow and green buntings and banners, carrying musician wearing the same colors. A local official, who played the role of Shariff Kabunsuan, was greeted by a costumed party and led to the City Plaza for the official opening led by Vice Mayor Graham Nazer Dumama. 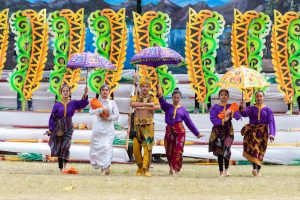 A short play portrayed how the Malay missionary tried to convert  brothers Mamalu and Tabunaway, ancestors of the indigenous peoples and the lumad. Tabunaway was converted to Islam while Mamalu  maintained the beliefs of his elders, resulting in Mindanao’s diversity.

In the visual arts, paintings by local artists were featured at the mid-century style Old Cotabato City Hall.

At the Social Hall of the People’s Palace, scholars, past winners of national and international competitions, vied for the best in  Qu’ran Reading.
Inspired by reality cooking shows, the Flavors of ASEAN Culinary Cuisine challenged students from different schools to produce tasty and eye-appealing dishes using available ingredients.

Behind the City Plaza, a crab festival highlighted competitions in crab tying, racing and harvesting the largest and heaviest crabs.

Making a bid to become the country’s top manufacturing hub for halal, the city organized  a business forum for entrepreneurs on halal certification and marketing.

The climax of the Shariff Kabunsuan Festival was the high-octane Kuyog Streetdancing and Showcase Competition participated in by groups from Cotabato City and other  Maguindanao municipalities. In the street dancing, students in exuberant costumes cheered and chanted slogans to the upbeat rhythm of the percussions as they marched to the stadium.

South Upi Vocational School won the grand prize for its interpretation of the Sulagad Fesitval. This was an ancient organic farming practice of the indigenous groups that guaranteed self-sufficiency.

“The Shariff Kabunsuan Festival is the city government’s way of saying thanks to the efforts of every Cotabateño who have made our city nationally recognized for its business progress and good governance,”
said Guiani-Sayadi. PR