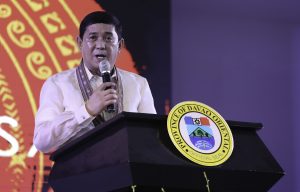 For the province of Davao Oriental, the year 2019 is a year filled with fruitful initiatives and modest triumphs in the midst of challenges and birth pains. And as the year 2019 draws to a close, the province looks back over the past year of implementing various initiatives that have made a difference in the lives of its constituents.

Under the leadership of Governor Nelson Dayanghirang, Davao Oriental lists the province’s highlight accomplishments for the year 2019.

On Peace and Order: Armed with sheer determination to foster peace and create conflict-resilient communities, the province has successfully sustained the implementation of its flagship program dubbed as Nagkakaisang Lingkod-Bayan ng Davao Oriental Barangay Outreach Caravan which puts premium on giving social services in conflict-affected and hinterland communities. By the end of 2019, the caravan has already visited 130 out of the 183 villages of the province, reaching out close to 500,000 beneficiaries while strengthening its convergence with 75 peace and development partner-agencies both from the national and local governments.
The concept of convergence espoused by the program has inspired the crafting of President Rodrigo Duterte’s Executive Order 70 or the Whole-of-Nation Approach to attain sustainable peace and to end local Communist armed conflict. In April, Davao Oriental became the first province in the country to pilot the localized implementation of the President’s national directive. Since then, scores of funding and support from the national government have started to be poured in for projects such as road construction and livelihood projects, among many others.

Governor Dayanghirang, who now leads the Peace and Development Council in the Davao Region, has also maintained Davao Oriental’s reputation as the most benchmarked province in terms of the implementation of the government’s Enhanced Comprehensive Local Integration Program for former rebels. Under his leadership, the province launched the Bal’lay Duwaan for the children of the former rebels housed at the provincial government-run halfway house for former rebels called Happy Home.

On Anti-Drugs: For its groundbreaking initiatives that has made a huge impact in the province’s fight against illegal drugs, Davao Oriental has once again been recognized as one of the country’s top performers in the intensified anti-drugs campaign. Governor Dayanghirang personally received the award on December 16 in Manila conferred by no less than the Department of the Interior and Local Government Secretary Eduardo Año and the Chairman of the Dangerous Drugs Board Secretary Catalino Cuy along with the department’s other top officials. The Performance Award is given to local government units whose Anti-Drug Abuse Councils have ideal functionality scores and have maintained or decreased its drug affectation as reported by the Philippine National Police and the Philippine Drug Enforcement Agency.

The province’s new award has been attributed to its active and notable campaign against illegal drugs, particularly the establishment of the Balay Silangan: Bagong Bahay Para sa Bagong Buhay (B4) for drug reformists, which is considered to be the Davao Region’s first Provincial Government-run drug rehabilitation facility.

On Environment:  Five years after the successful inscription of the Mount Hamiguitan Range Wildlife Sanctuary to the UNESCO World Heritage List, the Province of Davao Oriental once again gets international attention by successfully putting Pujada Bay to the world map. The Pujada Bay in the idyllic capital City of Mati has recently made it to the list of the Most Beautiful Bays in the World (MBBW) as it unanimously got the nod of the members of the MBBW Club during the 15th World Bays Congress in Toyama Prefecture, Japan, held last October.

Meanwhile, determined to protect the province’s natural resources, the Governor has stood firm on the Provincial Government’s position to protect at all costs the province’s very rich natural resources amid proposal to have its wide swathe of minerals-rich lands be declared a mineral reservation area. In successfully defending its highly treasured natural resources, the provincial government has reasoned out that the proposed mining reserve in the province, which covers around 8,497 hectares, affecting 11 villages, is in close proximity to Davao Oriental’s crown jewel, the Mount Hamiguitan Range Wildlife Sanctuary, which is Mindanao’s first and only UNESCO World Heritage Site.

On Revenue Generation: Davao Oriental has become the country’s first local government unit to implement and adopt the innovative Electronic Payment and Collection System touted to boost convenience for Davao Oriental taxpayers as well as increase accessibility of government services, among others. This initiative was implemented in a bid to promote ease of doing business, particularly in the delivery of core treasury services.

On Livelihood: Davao Oriental is the lone province in the country to bag the 2019 Kabuhayan Awards, a prestigious distinction from the Department of Labor and Employment (DOLE), for successfully implementing the department’s Integrated Livelihood Project (DILP). Under the DILP, the province was given a funding worth P5.7 million which was utilized for the peace and development programs of the provincial government.
On Socialized Housing: The Provincial Government started the development of the housing program as it targets to address the backlog of 50,000 housing units in the province.

Amid all these significant feats, the Provincial Government has vowed to double its efforts and at the same time to take on every challenge in the coming year to ensure a better future for all.

Governor Dayanghirang said that there will be more development to look forward to in 2020 as his administration is bent to implement various big-ticket development projects set for next year which promises hefty of opportunities for his Davao Oriental constituents. Securing funding from various sources in the national agencies, Governor Dayanghirang is optimistic that the province will be able to push through with these projects next year.

“Exciting times ahead as there are a lot of development that await for us in the coming year. All the provincial government is asking is the people’s trust and support for these projects to materialize,” said Governor Dayanghirang.
“Nothing is impossible if we just keep on pushing forward and stay united. Together we can achieve progress and sustainable development for all,” he added. By Karen Lou Deloso