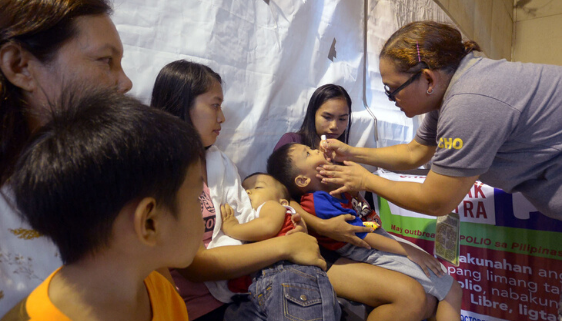 Only few parents in the city refused to have their children take the oral polio vaccine.

The City Health Office (CHO) has accomplished 99.1% of the target in the first round of the massive oral polio immunization in the city from Oct. 14 to 27.

“Our target is 100%, but we cannot attain that 100% because there are others who still refused,” said CHO technical division chief Dr. Julinda Acosta. “A very small group is still anti-vaccine.”

Acosta said some say the vaccination is against their religious beliefs.

She said some parents refused for they were advised by their pediatricians not to have the vaccination because their children are already fully immunized.

“Some parents were advised that it is okay not to receive the polio vaccine. There were already different teams who approached them six times, and yet they would not submit their children for vaccination, because according to their private doctors, they already completed the needed vaccines, so we cannot force them,” she said.

She said some children were also sick during the visit so the vaccine could not be administered.

“Others were out of town so they were not included in the vaccination,” she also said.

Based on the reports presented by the CHO, some barangays reached the 100% target of the Sabayang Patak Kontra Polio during the immunization rounds conducted by the health volunteers.

The unused vaccines will be returned to the Department of Health (DoH).

“By Friday, vaccines should be shipped back to DoH. All will be returned including empty vials, droppers, metal, and the rubbers,” Acosta said.

The CHO will intensify their information and education campaign, especially to mothers, on the importance of vaccines to their children.