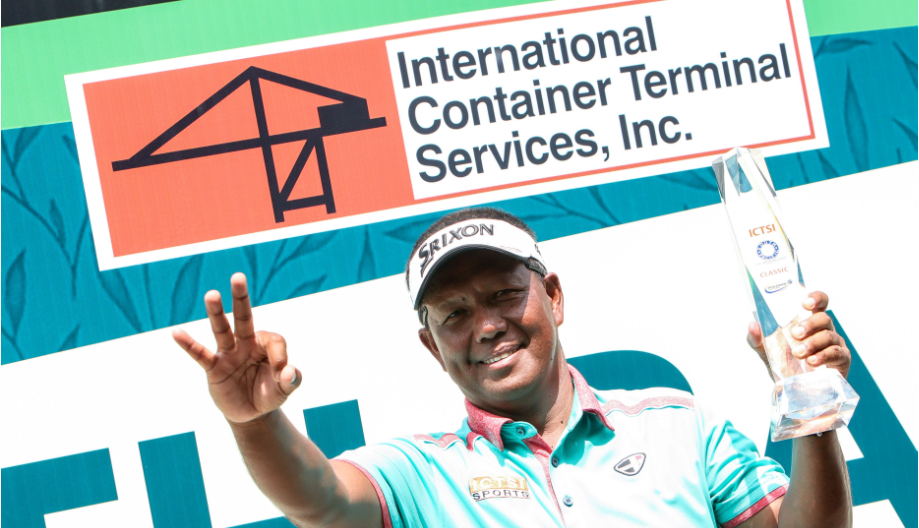 DAVAO – Tony Lascuña turned in another virtuoso performance that foiled not just one or two but three rivals of varied skills and talents, closing out with a scorching backside assault for a course record-tying 66 and a three-stroke victory over Ira Alido in the ICTSI South Pacific Classic here yesterday.

One stroke behind Michael Bibat, Clyde Mondilla and Alido after 54 holes, Lascuña played with so much confidence and poise of a veteran campaigner, flashing solid drives, superb iron play and putting that produced seven birdies, including four in the decisive stretch that turned what had appeared to be a tight finish into another romp.

“I played a superb game, especially at the back. But I just want to think that this (tournament) is really mine. This (victory) is so sweet,” said Lascuña, who punched the air with his left hand after holing out and hugging his five-year-old son Antonio III as he completed a 12-under 276 total worth another P550,000 he received from Pilipinas Golf Tournaments, Inc. executive director Narlene Soriano.

Lascuña, who dominated practically the same field at Apo which he also won by three over Fil-German Keanu Jahns last week, sizzled early with three birdies against a bogey at the front but it was not until he rolled in another birdie from short range on the 10th that he caught up with Bibat at nine-under overall. He then stormed ahead for good with back-to-back birdies from No. 12 in second-to-last flight, a charge that the erstwhile leaders had failed to match, enabling the Davaoeño ace to close out the milestone 10th season of the Philippine Golf Tour with back-to-back victories.

Make it three as the former three-time PGT Order of Merit winner, who struggled in the early going of the season hobbled by a dip in form and personal woes, sparked his late rebound with a thrilling victory in PGT Asia in Taiwan three weeks ago.

Sharing the spotlight was Japanese Takahashi Keisuke, who scored the first hole-in-one on No. 3 for a 67 also he settled for joint 18th with Nilo Salahog, who carded a 71, at 288.

One shot behind the troika after 54 holes, Lascuña braced for a wild finish as he tied Bibat with a birdie on No. 10 with Alido dropping a stroke behind and Mondilla fading with a 37 start. But he birdied Nos. 12 and 13, leaving Alido and Bibat behind and securing the victory with another birdie on the 17th for a 34-32 card that also matched Rico Depilo and Mondilla’s similar six-under cards in the second and third rounds, respectively, on a new course which hosted a PGT leg for the first time.

Alido and Bibat fell behind with bogeys on Nos. 12 and 13, respectively, but the former struck back with two birdies in the last five holes to save a 70 for a 279. Despite falling short again in his breakthrough bid, the 18-year-old shotmaker likewise capped an impressive season in the season organized by Pilipinas Golf Tournaments, Inc. marked by a number of Top 5 finishes. He received P370,000.

“I played okay but a lot of my putts just wouldn’t fall,” rued Alido, who also led in the third round at Aboitiz Invitational of PGT Asia, but wavered in the stretch and wound up fifth.

Bibat, who last won in 2013 at Palos Verdes and a playoff loser to Juvic Pagunsan in Iloilo last June, failed to recover from his mishap on No. 13 and double-bogeyed the 17th, limping with a 73 for third at 282 for joint third with American Lexus Keoninh, who matched Lascuña’s backside four-birdie binge to fire a 67. Each got P190,000.

Reeling back with a one-over card at the front, Mondilla bounced back with a birdie on No. 12 but the reigning Philippine Open champion dropped two strokes in the last six and hobbled with a 74, ending up at joint fifth at 283 with Kei Matsuoka (69) and fellow Japanese Ryo Nishimura (70) and Depilo (71).