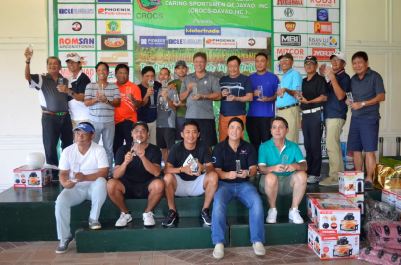 Brothers Jing and Jong Tan who both grew up at the lush fairways of the Rancho Palos Verdes Golf and Country Club shared the limelight by winning separate titles at the close of the Davao Crocs Invitational golf second edition held over the weekend.

Leaning on their course familiarity, the sons of sportsman-businessman and senior golfer Boy had their winning ways at the par 72-course as they submitted better cards over other pre-tournament contenders in the scheduled one-day competition.

Jing Tan scored an even-par 72 to bring home the overall gross title while Jong displayed steady putts at the greens for a 74, good enough for the Class A gross crown.

Aside from the Tan siblings, their co-Philippine Airlines golf campaigner Ninot Galicia also made his presence felt by winning the overall net crown on a 69 via countback noting three birdies and 12 pars to his card.
Mark Villorente settled for the Class A net crown next to Galicia after both tallied similar 69s.

Special designed trophies and merchandise were given to the winners during the awarding ceremonies held at the Rancho Palos Verdes Golf and Country Club clubhouse.