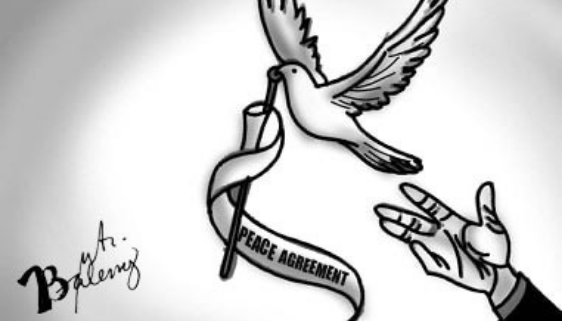 Murad said, as reported by MindaNews Sunday morning, that the rifle was “a token of our very strong appreciation for what he (President Duterte) has done to the Bangsamoro people and our homeland.”

The report added that the group turned over several firearms, including high-powered rocket launchers as about 1,060 former combatants, 105 of them members of the Bangsamoro Islamic Women Auxiliary Brigade, were decommissioned.

As he thanked the President, Ebrahim was quoted as saying: “We will continue to uphold our part of the bargain.”

In response, the President, as he assured the former rebels of the support of government in their goal to become productive, said the event was a “huge step in achieving lasting peace.”

Of course, the event was another part of the rich history of Mindanao and its revolutions.

More than two decades ago this month, the government and the Moro National Liberation Front also signed a similar peace agreement – their second after the one signed in Tripoli, Libya in 1976 – but as the two sides threw accusations at each other, the efforts that were put into that sacred document went to waste.

One biggest challenge is how both sides would be able to suppress the hawks within their ranks whose only goal is to see that no peace is achieved because it will stop them from pushing forward their vested interests.

Sustaining peace is easier said than done, but if both sides are committed to strengthening it, attaining that goal is may not be difficult. Of course, every step should always be anchored on trust.