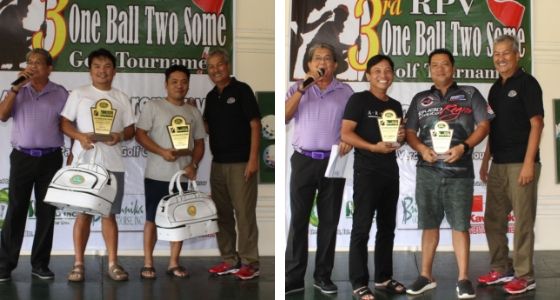 Leaning on their long drives and steady putts, the pair of Jing Tan and Addy Briones added another title to their cabinet of championships, this time winning back-to-back gross crowns while the tandem of Jong Tan and Brian Davila shared the limelight by winning the Division 1 (0-8 handicap) net trophy which highlighted the 2019 Rancho Palos Verdes One-Ball, Two-some tournament, Saturday.

Tan and Briones, both Philippine Airline Interclub golf campaigners scored a one-over 73 for their second one-ball, two-some gross trophy only to win via countback next to the pair of Roderick Lo and EJ Casintahan.

Despite the countback, the pair of Casintahan and Lo settled for the Division 1 gross crown.

Pre-round favorites Jong Tan and Brian Davila wound up winning the Division 1 net crown on a 67 but only to fall short behind Russel Mon Salazar and Paul Ancla who took the overall net title, card with a 64.

Randy Cadiongan and JP Marfori had 69 for the Division 1 net runner-up while Kim IL Gyu and Lee Bong Hee finished with 75 for the gross runner-up honors.