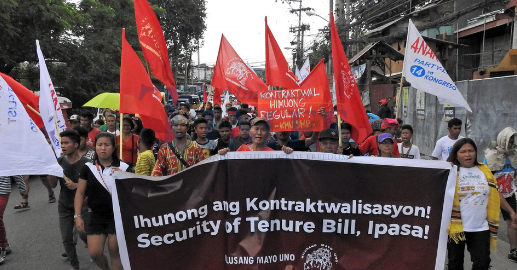 Around 500 laborers marched in the streets before gathering at the Freedom Park for a short program to commemorate the International Workers Day.

Meanwhile, the protesters slammed the Duterte administration for failing to fulfill its promise of ending contractualization in the country. The group also called on the government to pass pro-laborer laws.

“We urge the president to sign the Security of Tenure Bill,” Mercy Abucayon of the Pepsi Cola Employees Union under Sentro ng Mga Nagkakaisa at Progresibong Manggagawa, said at the sidelines of the rally.

According to Abucayon, after three years under the President Duterte’s term, no major developments have occurred for the labor sector.

“We, the laborers, are totally disappointed because this is one of his promises when he ran for the office. In fact, we even supported him during the election with high hopes that he will pursue the regularization of the contractual workers,” Abucayon said.

She added that a big chunk of Duterte’s supporters are from the labor groups who believed in his promise.

According to Abucayon, majority of the members of their union have been serving for 10 years but have remained as contractual workers.

“Although he has signed executive orders on End of Endo, it is not what we are asking for. We want him to totally abolish contractualization. We do not want to be regularized to contractors or agencies but to the principal employers,” Abucayon said.

Abucayon said they will continue to hope that the Duterte administration’s promise for laborers will be fulfilled.

“This is the reason that various labor groups have gathered here today to be as one in our call for regularization and the passage of the Security of Tenure Bill,” she said.

According to Abucayon, joining the protest rally are groups from Kilusang Mayo Uno, Trade Union Congress of the Philippines, Sentro, Akbayan, Anakpawis, and Kabataan Partylist, among others.

Brig. Gen. Marcelo C. Morales, regional police director, said their security plan was a success, although the rallyists were also in their best behavior.

Earlier, Morales reminded all police units in the region “to be alert and take extra precaution for possible atrocities” that the NPA may carry out.

“I am directing all field unit commanders to strengthen and implement utmost security measures to preempt harassments of PNP personnel, ambuscades, raids, sabotage of cell sites and vital installations.

We are not discounting the possibility that domestic threat groups may take advantage of the situation by staging offensive actions coinciding with the Labor Day celebration,” he said.

Morales said the police always observe maximum tolerance when it comes to protests but still within the bounds of law. “We can tolerate lawful expression and peaceful assemblies but we will never compromise the rule of law and the right of the majority to feel safe, secure, and convenient,” Morales said. With reports from Rhoda Grace Saron.