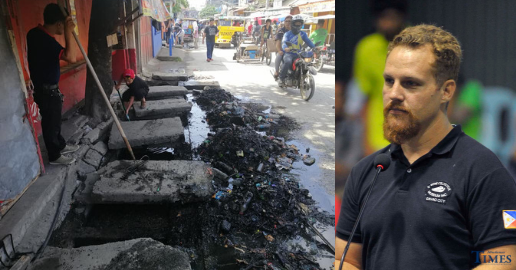 A Datu Bago awardee is calling for the resignation of the chief of City Environment and Natural Resources Office (CENRO) and the Captain of Barangay 37-D over a garbage row.

Darrell Blatchley, an American marine expert who runs the D’ Bone Collector Museum in Barangay 76-A, Bucana, is demanding for a public apology and resignation of the Cenro OIC chief Marivic Reyes and 37-D Barangay Captain Prime Atillo for “publicly question(ing) my honesty” over a Facebook post on his effort to clean a canal in Barangay 37-D, Poblacion District.

“You basically called me a liar. You then went on to claim I did it to defame Bucana,” said Blatchley in a statement posted on his Facebook account.

“I have no need to do that. Your own inaction and derelict of duty has made Bucana filthy.”

Blatchley was hurt over on the media statements of Reyes and Atillo questioning the timing of the posting of his canal clean-up.

On Wednesday, Blatchley posted photos of a filthy canal in the adjacent barangay just across the museum. When someone commented “I challenge you to clean it,” Blatchley accepted the challenge.

The next day, Blatchley and his group cleaned the canal – and photos were posted on his Facebook account on that day.

The barangay official, in a statement printed in a daily paper (not TIMES), said she felt bad because Blatchley’s post implied that her constituents are irresponsible and filthy.

She explained that waste trapped in the canal usually come from San Pedro Street and Roxas Avenue.

Atillo said her barangay has been addressing the garbage problem.

Saying that he has documented years of barangay inaction towards garbage, Blatchley assailed the barangay captain for not doing her job.

“For instead of admitting your failure, you would rather lie (by saying it’s others’) garbage and then malign my name,” he said. “I have nothing to gain, you have everything to lose.”

“You are not fit to be a public servant. You lack maturity and discipline. Your barangay is plagued with illegal vendors, drugs and garbage,” the American said.

He also assailed Atillo’s statement that putting CCTVs on the street will solve the garbage problem.

“How can you say CCTV will fix it when you don’t even take action,” Blatchley said. “You failed.”

In assailing the Cenro chief, he said “You failed. You did not do your research. You questioned my honesty. I have nothing to gain by lying.”

The American marine expert said the two officials “have shown what is sadly known as Philippine Pride… pride in being insulted by the truth.”

“Pinoy pride should be in our cleanliness. Change happens through discipline not excuses,” he said.

“You want to claim the city is clean and yet if you truly opened your eyes you would see you fall short. Bucana, Isla Verde, Talomo, all parts of Davao City are filthy,” the American who stayed in the city for around 24 years said.

In 2015, he was awarded with the Datu Bago for his “service to the city.” The Datu Bago is the highest award given to its residents.

“I love it here, for that very reason I am a public servant doing my part to make the Philippines cleaner and better,” Blatchley said as he urged Mayor Sara and the people of Davao to look into the matter.

“I am a guest in your lands,” he said. “If you are a guest and host’s house is on fire or flooding, is it not right to inform them and help?”

Effort to contact both Reyes and Atillo proved futile as of press time.