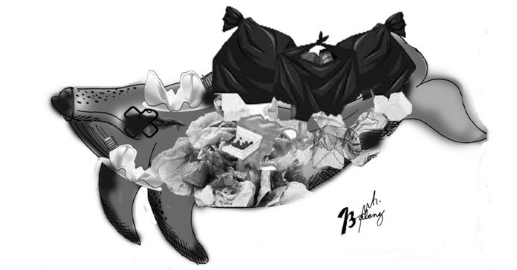 Editorial: If the seas die, so will our planet

Our seas are dying. If nothing is done to stop plastic pollution that has become a plague over the years, pretty soon, our planet will be pushed to the edge of extinction. The millions of tons of plastic floating in the ocean have become so dangerous that we are now seeing almost daily the consequence of how it affects the seas and ultimately, our own lives. Unfortunately, we have turned a blind eye on the many cases of beached whales and dolphins, some of them identified as endangered species, which could no longer be saved by fishermen, marine biologists and experts.

The death of a juvenile Cuvier’s beaked whale  last March 16 at Brgy. Cadunan, Mabini town in Compostela Valley province is a glaring example of the gravity of plastic pollution in the country and in the world. A horrific 40 kilos of plastic were recovered from the stomach of the cetacean which, according to Darrell Blatchley, expert and curator of the D’Bone Collector Museum, was the “most plastic we have seen in a whale.”

A necropsy conducted by Blatchley and Dr. Elaine Vera Belvis of the Bureau of Fisheries and Aquatic Resources (BFAR)-Fishery Management Regulatory and Enforcement Division showed that “all stomach compartments were full of foreign materials such as plastics of varying sizes and shapes, sacks, among others.” Inside the belly of the 15.4-foot whale were 16 rice sacks, four bags similar to those used in banana plantations, and multiple shopping bags. The full list of debris will be known in the coming days as his group is still meticulously going over the plastic materials.

This is not the first case of a marine mammal choking and dying due to the ingestion of plastics and unfortunately, this will not be the last. Human activities and lack of concern on the health of the seas, in addition to coral bleaching, sea level rise and other natural events have placed our waters under great peril. The clock is ticking. If the seas die, so will our planet.